Why Does a Man Hurt a Woman?

HealthWiki > Where Women Have No Doctor > Chapter 18: Violence Against Women > Why Does a Man Hurt a Woman?

These reasons may explain why a man abuses his wife, but they do not give him permission to do so.

A man may offer many excuses for hurting a woman—that he was drunk, that he lost control, or that she ‘deserved it’. But a man chooses to use violence because it is a way he can get what he needs or what he feels is rightfully his as a man.

When a man does not feel that he has power over his own life, he may use violence to try and control another person’s life. It is natural for someone to want to control his or her own life in normal ways, but it is wrong to try and control someone else’s life, especially with violence. Here are some of the reasons why some men hurt women:

Violent or abusive relationships often happen when one person has more power over the other. 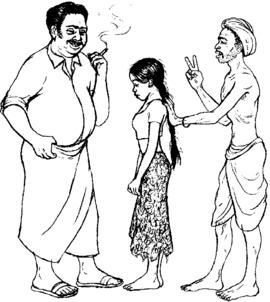 If men think of women and girls as their
property — something they own — they are
more likely to feel as though it is their right
to treat them however they want.

← PREVIOUS | NEXT →
Retrieved from "http://en.hesperian.org/w/index.php?title=Where_Women_Have_No_Doctor:Why_Does_a_Man_Hurt_a_Woman%3F&oldid=92004"