The Story of Laura and Luis

HealthWiki > Where Women Have No Doctor > Chapter 18: Violence Against Women > The Story of Laura and Luis 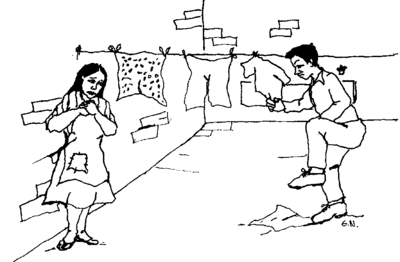 Luis was 12 years older than Laura and was already a successful merchant when they met. He sold his goods to the store where Laura worked as a clerk to help her family pay the rent. Luis was charming and would talk about the kind of life they could have together. He told Laura he would buy her anything she wanted and she would be his “best woman.” He often bought her new clothes that he liked to admire her in, telling her how pretty she would be if she stopped dressing the way she did. He eventually began to see her every day, and soon asked her to quit her job and marry him.

After they married, Laura expected Luis to keep his promises. Instead, things began to change. He would not allow her to go out, because she “looked so ugly.” In fact, he took all the beautiful clothes he had bought her and burned them, saying, “That stupid, ugly woman didn’t deserve such clothes.”

One day Luis came home in the middle of the day and tore all the clean wash down from the line, accusing Laura of sleeping with his friend. When she said that she had just gone to visit her mother, Luis called her a lying whore and hit her. He said she would not go to visit her family—they did not want her either. He never said anything more about it, but when he came home later that night, he brought her a present and told her how much he loved her and wanted to take care of her.

When Laura got pregnant, she thought Luis would start treating her better. But it seemed to give him more excuses to hurt her. When he got angry, he started hitting and kicking her in the stomach. She was terrified she would lose the baby, but she had no place to go. She believed Luis when he said her family did not want her, and besides, she had no money of her own. There were times when Luis would go several weeks without losing control, and Laura would convince herself that everything was OK. He really did love her, after all. If only she could learn how to avoid setting him off. She would try even harder than before, but nothing helped.

Through the years, Luis drank too much, threw her against walls, and would force her to have sex even when her body ached from his beatings. Laura awoke one night to find him holding a knife to her throat. The next day, he told her she was imagining things, that she was crazy. He always said that if she told anyone “lies” about him he would kill her. She didn’t tell anyone and she went out as little as possible. She hated the thought of anyone seeing her bruises and knowing what he did to her. Laura often thought about leaving, but she did not know where to go.

After 12 years of being his wife, not only was Laura afraid of what he would do to her, but without him she would have no home, no money, no father for her children. Luis had said bad things about her to the people at the store where she used to work, and she knew that, because of her children, no one would take her in as a domestic servant. Laura felt so alone.

Laura’s father was dead now and her mother lived with her brother’s family. They did not have room for her and her children. Her sister was deeply religious and told Laura it was her duty to stay with her husband, even if she were killed. “That is the way it is meant to be.” She had so much work to do at home she was always busy. And since Luis got mad when she went out or when someone came to visit, Laura stopped seeing her friends. She was sure they had long since given up on her. Besides, most people thought that it was okay for men to ‘punish’ their wives.

Then came the night when Laura’s oldest daughter was 11. She came to Laura crying, saying Luis had hurt her “down there.” Laura was shocked. She had thought the children would not be affected by Luis’ behavior. She knew it would do no good to confront him, but she would NOT let it happen again.

When Laura lost her last pregnancy, the health worker who examined her asked about her injuries. Laura had made some excuse. The health worker nodded her head and gave Laura a card with an address in the next town. She told her if Laura ever needed to leave, she and her children could go there, but to make sure that she was ready to leave when she did. Laura was ready now.

Why did Luis hit Laura? These are some of the wrong ideas that people have:

← PREVIOUS | NEXT →
Retrieved from "http://en.hesperian.org/w/index.php?title=Where_Women_Have_No_Doctor:The_Story_of_Laura_and_Luis&oldid=92030"