HealthWiki > Where Women Have No Doctor > Chapter 18: Violence Against Women > Kinds of Violence

There are many different ways that a man tries to gain power over a woman. Beating is only one of them. But all of them can hurt a woman.

Imagine that the circle below is a wheel. Power and control are at the center of the wheel because they are the reasons behind all of the actions. Each section of the wheel is a behavior that a violent man may use to control a woman. Violence is the rim of the wheel—what holds it together and gives it strength. 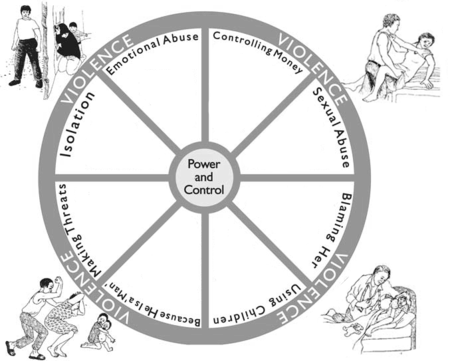 One form of abuse often turns into another
In many cases, verbal abuse becomes physical abuse after a while. It may not seem like it at first, but the man may slowly begin to ‘accidentally’ push or bump the woman, or begin to sit down in the place the woman usually sits, so that she has to move. If this behavior works for him, it may get worse until he becomes violent. Not all women who suffer other forms of abuse are beaten, but all women who have been beaten have suffered from other forms of abuse.

← PREVIOUS | NEXT →
Retrieved from "http://en.hesperian.org/w/index.php?title=Where_Women_Have_No_Doctor:Kinds_of_Violence&oldid=92102"