HealthWiki > Where Women Have No Doctor > Chapter 18: Violence Against Women > Warning Signs 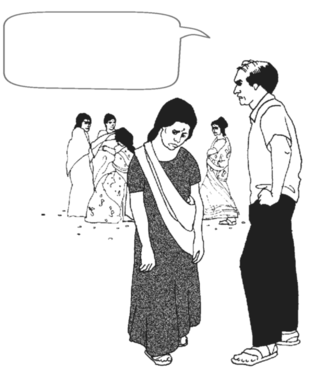 Stupid woman. I told you not to go out, especially looking as ugly as you do.

It does not matter how much you love a person. Love cannot change someone. Only that person can choose to change himself.

When an abusive relationship becomes violent, it is much harder to leave. The longer a woman stays, the more control the man has over her, and the less faith she may have in herself. Some men are more likely to become violent than others. There are certain signs that may mean a man will become violent. If you see these signs, and have a way to get out of the relationship, think carefully.

Ask yourself these questions:

Some women are more likely to be abused

← PREVIOUS | NEXT →
Retrieved from "http://en.hesperian.org/w/index.php?title=Where_Women_Have_No_Doctor:Warning_Signs&oldid=92021"