On long assembly lines, workers glue, solder, and screw together all the pieces that make the electronic product. Workers then clean, polish, and test them. Products that do not pass the tests are sent to a fixing area, where workers reopen the defective piece and repair it manually.

When people assemble electronics at home, it can lead to health dangers for workers, families, and neighbors. (See Chapter 20: Doing factory work at home.)

Non-electronic parts are made in other factories and become part of the final product in the assembly area. Making these components is also dangerous for workers and the environment.

Plastic shells and casings: Electronics use plastic outer shells because they are lightweight, durable, and cheap. Many dangerous chemicals are used to make the shells stronger and fire resistant. Companies can make less toxic shells by:

Batteries: Whether electronics use disposable or rechargeable batteries, all batteries contain toxic materials. The workers who make the batteries (and their families) suffer the most, but the dangers begin even earlier for the workers who mine the metals used in them. And after the product is thrown away, the chemicals in batteries leak into and pollute our water. Safer batteries and designing products to use less power will reduce the spread of toxics from batteries.

Wires and cables: Cables and wires are made from copper covered with plastic. Polyethylene and PVC (polyvinyl chloride) are the most common plastics. Most plastics are safe to touch, but heating them releases toxic chemicals that can irritate your nose, throat, lungs, and skin and may cause cancer.

Monitors and screens: The CRT, LCD, plasma, and LED screens used in electronics are often welded and glued together with a chemical that hardens when exposed to UV light. They may be filled with liquid crystals or neon and xenon gas. While most of the processes are automated, workers in screen factories are exposed to harmful gases while producing and testing screens, and maintaining factory machinery. Larger TVs and monitors weigh more and cause more muscle strain for workers.

Battery workers fight the company that poisoned them

Workers making nickel-cadmium batteries for Gold Peak Batteries in China were poisoned with cadmium. Cadmium is a toxic metal that damages the lungs, kidneys, and bones, and causes cancer. When a Gold Peak worker told her doctor she was suffering from pain, the doctor did some blood and urine tests. They showed very high levels of cadmium in her body. Other workers had dizzy spells, headaches, nausea, and miscarriages. When they were tested, their levels were also high. As word got out, many more workers, their children, and families were tested and found they were poisoned. 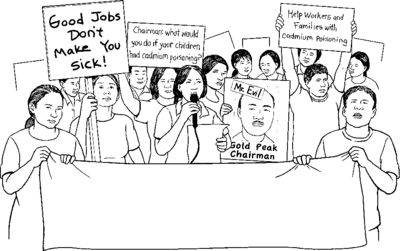 Gold Peak:
Take care of the workers you poisoned!

Gold Peak workers believed the company should take responsibility for poisoning them. They demanded treatment and compensation for their lost health.

The company tried to quiet them down. They falsified tests to show lower cadmium levels, claimed they could remove the cadmium, subjected people to ineffective, painful treatments, and fired the most vocal workers. They also closed several factories and moved them to more remote towns.

Workers held protests, sued the company, appealed to the local and national government, gathered support from non-governmental organizations, and educated others about cadmium poisoning. The company was forced to start a fund to cover yearly testing and medical expenses for former and current workers. But every year more workers are found to be poisoned with cadmium and they struggle to get compensation.

In 2006, cadmium was banned by the European Union and now lithium-ion and nickel-metal hydrate batteries are more common. However, China still allows the production of cadmium batteries. Gold Peak produces them in remote parts of China where workers still lack proper protections and information about cadmium poisoning. In 2015 Gold Peak will stop paying for workers’ yearly tests and will only offer compensation to workers who can prove they were poisoned.

Work in assembly factories is very repetitive and very fast. The stress and strain this creates causes many injuries. Some ideas to change your workplace are in this section, and many more are proposed in Chapter 7: Ergonomics. 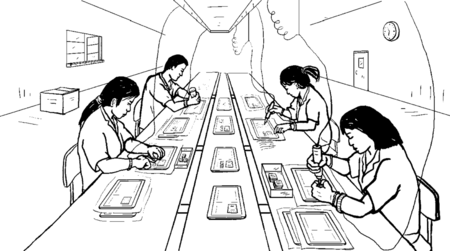 To meet the quotas, workers have to place parts every few seconds.

The Foxconn suicides and death from overtime

Workers in a Foxconn factory in China make mobile phones and other products for many big electronics companies around the world. The factory has rules, like other factories in China: "No talking!" "No looking away from work!" People can take breaks only for meals. Supervisors and managers yell and insult workers to make them work even when they are in pain or sick. The factory forces them to work overtime, sometimes keeping workers on the job for 24 hours or more.

In 2010, a young technician, Yan Li, died from exhaustion after being forced to work 34 hours straight. That same year, 18 workers tried to kill themselves to escape their inhumane working conditions.

Foxconn made excuses about why workers were committing suicide and why Yan Li died. Instead of addressing the main problem — bad working conditions — they made small changes. They raised wages a little, put nets around buildings to prevent people jumping from the roof, and opened some recreation rooms. But when they build larger facilities in other cities, Foxconn continues the same working conditions that led to the suicides in the first place. And the suicides continue.

Changing the workplace to reduce muscle strain and overuse injuries

Having everything you need close at hand to do a job strains your body less, especially when you repeat movements hundreds of times during a shift. Supporting the part of your body that is moving, such as your wrists, fingers, and elbows, and having a chair and table that fit your body can also help reduce pain and injury from work.

Look at your workstation to see what is causing your aches and pains:

You can find suggestions about making changes to your workstation in Chapter 7: Ergonomics. 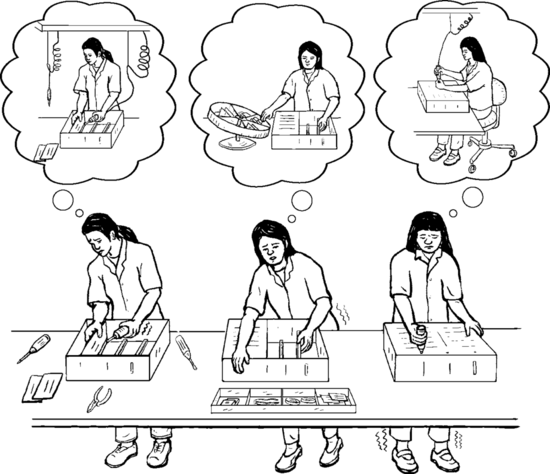 Sometimes your work makes you repeat the same movements too many times and for too long, and no amount of change in equipment or stretching will prevent pain and injury. Workers can protect themselves by taking more control over the work process itself. Talk with your co-workers and bosses about:

Some factories do not give workers protective equipment or clothing. Others give all workers the same equipment regardless of the dangers specific to their work or whether a worker’s body is large or small. When necessary, employers should provide:

Workers clean electronics with different methods and chemicals, including pressurized air, polishing machines, isopropyl alcohol (IPA), and other solvents and degreasers that contain methanol or other harmful chemicals.

Cleaning chemicals can get on your skin, causing irritation and rashes. Some can be absorbed through the skin, harm your internal organs, and cause blindness. Breathing their fumes can make you dizzy, tired, or give you a headache or stomachache. Some are flammable and can cause fires. Polishing metal casings generates a lot of dust.

I worked at the Wintek electronics factory in China, cleaning computer screens. We used to clean them with IPA alcohol, but one day the factory owner gave us a new chemical. A few weeks later, I started feeling dizzy and weak. I was not the only one. Many of us complained to the supervisors that the new chemical was making us sick, but they just told us to keep working with it or quit.

One day I woke up and couldn’t move my body. My family took me to the clinic and we found many of my co-workers there too. The tests showed we had been exposed to hexane, a chemical that can cause paralysis and death. Four workers died.

This same problem also happened to us in our workplace in the USA.

We found out the boss had switched from IPA to hexane because it dried faster and he could make more money. But the factory did not have the right ventilation or provide the right protective equipment for us to use this chemical. Many organizations supported us in our fight to get the factory to provide health care and compensation to the sick workers. They told us we should go to the big companies that Wintek supplied because even though they were subcontracting their work, they were also responsible. The brand said they didn’t know anything about hexane. They said they told Wintek not to use it.

Workers test products before packing and shipping. Much of the testing is done by machines. However, workers in the testing area are exposed to: 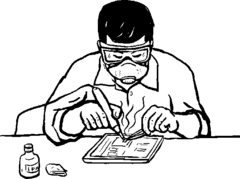 Chemicals used in the factory are recycled or just thrown away as waste. This can harm workers as well as the surrounding communities.

Worker and community groups have joined together to get factories to take responsibility for the safe disposal of factory waste. Or even better, not to generate any waste at all! (See Chapter 33: Pollution from factories.)

Companies design electronics to break or go out-of-date after a short time, so people will have to buy new ones. They change models every year, make them impossible to fix, and keep repair instructions and programming secret. They do this to encourage consumers to buy new products because the more often people buy, the more profit the companies will make. This is wasteful and expensive.

Sustainable design is a movement to push companies to make electronics easier to repair, and to produce products that last instead of designing for the dump. Sustainable electronics have:

Designing electronics so they are easy to repair reduces the need to mine for materials, produces less waste during production and recycling, and makes electronics more affordable.

After they are thrown away, many electronics are dumped in communities in Asia and Africa. People working by themselves or in small groups open the electronics, breaking screens and shells to get to the PrCBs. They melt plastic casings and wires to get inside to the gold, silver, and other metals that they remove and then sell to make a living.

If you work recycling electronics, you are exposed to many of the chemicals used in production as well as other, even more dangerous chemicals created by burning the material.

You can reduce the amount of chemicals that get into your body by:

← PREVIOUS | NEXT →
Retrieved from "http://en.hesperian.org/w/index.php?title=Workers%27_Guide_to_Health_and_Safety:Assembling_electronics&oldid=95564"