Mosquitoes lay eggs in standing water. It takes about 7 days for mosquito eggs to hatch. By getting rid of standing water once a week, or by making water move and flow, mosquito breeding is interrupted and they do not live to spread diseases. To prevent mosquitoes from breeding:

Remove mosquito breeding sites around the house and community: 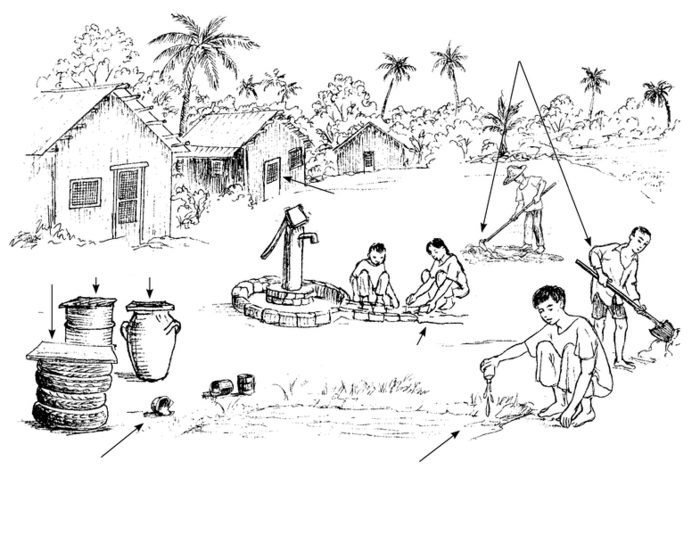 Clear drainage ditches so water can flow through.
Use screens on windows and doors.
Keep water containers covered.
Make sure there is proper drainage around community wells and water taps.
Clear away old cans, tires, or broken pots that collect water, and fill any pits.
Biological controls, such as a bacteria called BTi, are used in some places to kill young mosquitoes without harming the environment. (For more information about BTi, see Other Water and Sanitation Resources.)

Other methods used in community mosquito control programs include: 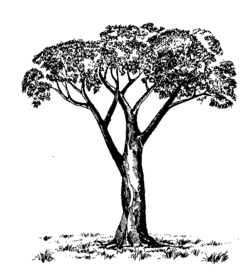 Where mosquitoes breed only part of the year, they can be quickly destroyed with insecticides. In the past, the pesticide DDT was widely used to kill malaria mosquitoes, and was sprayed outdoors over mosquito breeding sites. But DDT is a poison that does great harm to people and animals, causing cancer and birth defects. DDT can travel great distances in the air and in water, and stays in the environment for many years, becoming more dangerous over time. Because of this, community prevention activities and less toxic insecticides are now recommended in most countries.

One type of insecticide, called pyrethrins, causes less long-term harm to people, animals, and the land. Another advantage of pyrethrins over DDT or malathion (another common but harmful pesticide) is that much less is needed to spray the same amount of space.

Pyrethrins do not collect in the environment. But they are toxic when people are exposed to them, and must be used with care. Pyrethrins irritate the skin and eyes, and cause rashes and difficulty breathing. Avoid direct contact with this insecticide, especially children and women who are pregnant or breastfeeding. Pyrethrins are very toxic if they get into water sources. Never use pyrethrin products near waterways or ponds.

Recently, DDT has come back into use in different ways than before. It is now recommended only for limited use indoors, in a method called Indoor Residual Spraying (IRS). This is spraying small amounts of DDT on the inside walls of a house to kill mosquitoes that land there. This method uses less poison in a smaller area, prevents it from entering water sources, and has less chance of causing mosquitoes to become resistant.

All insecticides are poisons. When using DDT, pyrethrins, or any other insecticide:

Overuse of any insecticide can cause mosquitoes to become resistant to it and the insecticide will no longer harm them. (To learn more about the dangers of insecticides and how to use them as safely as possible, see Chapter 14.)

Spraying insecticides is an emergency measure for quick mosquito control. But insecticides will only reduce mosquito-borne illnesses if they are used as part of a program that includes treatment for everyone, communitywide control of mosquito breeding, and community education.

Over the past 25 years, people in Managua, Nicaragua have been increasingly getting sick with dengue fever. Because the mosquito that spreads dengue lives in water in and around homes, dengue spreads widely when more people move into tropical cities without safe water storage and wastewater drainage.

People in Managua worked with scientists, NGOs, and the Ministry of Health to reduce and prevent dengue in 10 neighborhoods. The first thing they did was to collect ‘evidence’ of the spread of dengue. Children collected samples of water with mosquitoes in different stages of growth, scientists tested children’s saliva to see how many had been bitten by dengue-infected mosquitoes, and community members visited people’s homes to ask them what they knew and thought about dengue. 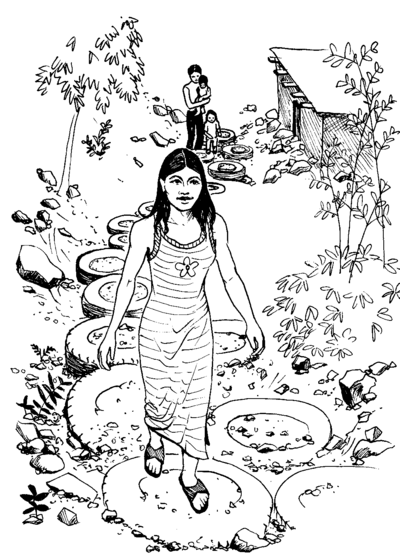 They used neighborhood meetings, posters, and sociodramas to share what they learned about dengue. Children played games where they smashed hollow dengue mosquito puppets, scattering the candy hidden inside. Young people, including gang members, wrote and performed popular-style songs about preventing dengue.

Each neighborhood developed its own mosquito control program. Because they knew that mosquitoes breed in discarded tires, one group decided to collect old tires, fill them with soil, and use them to make stairways up steep paths. That got rid of mosquito breeding sites and made it easier to get up and down the hillside. Other tires were used as planters.

A group in another neighborhood made and sold low-cost lids for water storage barrels. This got rid of mosquito breeding sites while also earning money for their community.

The community dengue prevention program continues today. Not only are fewer people getting sick with dengue, but the program has brought other benefits: 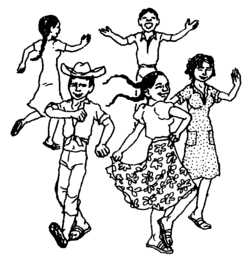 Now, people from these 10 neighborhoods are helping other communities get organized to stop dengue and improve community life.

Email us at [email protected] with a story and the first 50 responders will receive a free copy of Community Guide to Environmental Health in either English or Spanish.
← PREVIOUS | NEXT →
Retrieved from "http://en.hesperian.org/w/index.php?title=A_Community_Guide_to_Environmental_Health:Community_Mosquito_Control&oldid=96538"