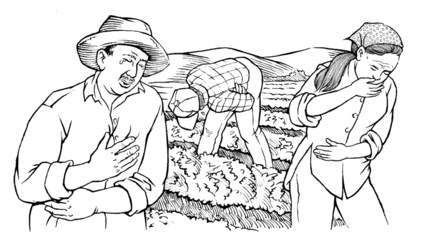 Pesticides are chemicals used to kill insects, rodents, and weeds that might harm our crops and health. But pesticides also poison and kill other living things, including helpful plants and insects, and animals and people. Pesticides can drift far from where they are used and pollute the soil, water, and air.

In this chapter we use the word pesticides to describe all chemicals used to control pests. They include:

Farmers did not always use pesticides, and many farmers have great success farming without them. If you have a choice, it is safer for your health and the health of the land not to use pesticides. Pesticides are never safe. But for farm workers, plantation workers, and anyone who feels they must use pesticides, there are ways to reduce harm and to be as safe as possible.

Why are pesticides used?

Pesticides are not healthy for the food, the farm, the farmer, the farm worker, or the environment. So why do people use them? 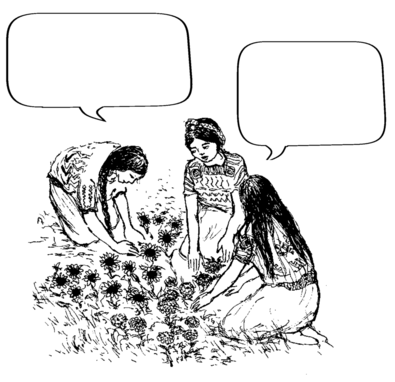 Farm owners call pesticides “medicine.” But are they really medicines?
No. They are poisons that kill weeds and insects. They can even kill people.

Pesticides are often used together with farm machines, giant irrigation systems, low-paid workers, and government subsidies to produce crops that can be sold cheaply. Pesticides can kill everything that might reduce crop yields or make the food look less attractive, so large farm corporations use them as part of a system to sell more food.

For family farmers to compete with large corporate farms, they often believe they too must use pesticides. When a struggling farmer needs to feed his family today, he may not think about what will happen to his own health or his family’s health tomorrow. But this way of producing crops has high costs for people’s health and the environment.

Over time, pesticides cause great harm. After years of spraying, pests may become resistant to chemicals. Pesticides also kill many insects and birds that are not pests and that actually control crop pests. When this happens, pesticides no longer reduce crop loss from pests, crop yields go down, and family farmers are forced into poverty. Worse, pesticides kill thousands of people every year and make many more sick.

The companies that make pesticides say their products will help farmers “feed the world.” But what these companies really want is to feed their profits without considering the long-term harm they cause. Pesticides are one part of an unjust and unhealthy system that makes a few people richer and makes everyone else sick.

There are many kinds of pesticides

There are many types and brands of pesticides, and they are called different names in different countries. Some pesticides may be banned in one country for being too dangerous, while still being sold in other countries.

Pesticides are made in different forms: powders for mixing with water and spraying, granules and dusts for dusting, liquids for spraying, coatings on seeds, pellets to kill rodents, and others. Mosquito coils and rat poisons are common for killing pests at home.

I understand that pesticides are poison. But I still need to go to work on the banana plantation. Sometimes I feel sick when I go home. How can I know if it is from the pesticides we use?

Email us at [email protected] with a story and the first 50 responders will receive a free copy of Community Guide to Environmental Health in either English or Spanish.
← PREVIOUS | NEXT →