Violence in the factory

HealthWiki > Workers' Guide to Health and Safety > Chapter 22: Violence > Violence in the factory

There are many forms of violence. Sometimes we do not recognize them as violence because we are used to them and they feel normal. But the bad effects violence can have on our mental and physical health are not something that we should get used to. We do not think that injuries from dangerous machines are normal. Likewise, why should we think violent behaviors are ok? 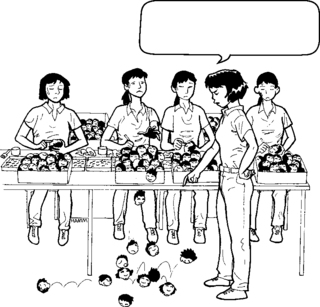 Look at you! You are so clumsy, stupid girl!
An abusive supervisor is a workplace danger.

Constant yelling, name calling, rude comments, and insults are forms of emotional and psychological violence. Sometimes workers do not even recognize this abuse because it is so common. Constant abuse damages self-esteem and trains us to accept bad working conditions and other types of violence as well.

Physical violence is the most visible kind of violence. Workers are beaten, cut, slapped, shoved, pinched, hit, and burned. (To treat these injuries, see First aid for machine injuries.) Some employers hit in places where bruises cannot be seen, so the worker cannot report and prove it. When workers live with the constant fear of being struck by their supervisors, it also creates stress and other mental health problems (see Chapter 27).

In too many countries, factory owners pay thugs (sometimes other workers or corrupt union officials) to murder workers, organizers, and union leaders to stop them from demanding better wages or conditions. Sometimes they count on the police or military to carry out this work for them. To create more fear and gain more control, they also threaten and kill workers’ families. 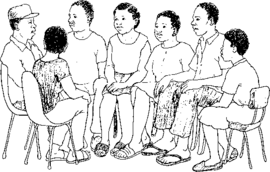 Bosses use violence to instill fear in workers and shut up union leaders. Many workers are reluctant to talk about their fear of violence and instead let the violence do just what it was meant to: prevent people from participating in organizing. For a group to withstand violence, it is important to talk about people’s fears and come up with ways to support each other. When you call a meeting to discuss fear of violence:

Some male workers might not want to admit to a large group they are afraid, since men are raised not to show fear.

If the climate at your factory becomes extremely violent, the group might consider temporarily hiding their organizing efforts. This may not stop the violence, but it can give workers a chance to regroup and decide how to continue the struggle in ways that feel safer.

← PREVIOUS | NEXT →
Retrieved from "http://en.hesperian.org/w/index.php?title=Workers%27_Guide_to_Health_and_Safety:Violence_in_the_factory&oldid=95429"