Protect yourself and others

HealthWiki > Workers' Guide to Health and Safety > Chapter 22: Violence > Protect yourself and others

Do not be caught alone. Many times, thugs target workers when they are alone. Walk with others to and from the factory or bus station. If it is possible, have someone meet you at your bus stop. If you know of any worker who is being harassed or who you think might be hurt, find ways of accompanying him or her so that he or she is not alone.

If a worker is threatened by the boss, a supervisor, or another worker, do not leave her alone with the person who threatened her. Organize other workers to stay close to her at the factory and going to and from work. A worker alone is more likely to be attacked than a group of workers together.

To help yourself or others, learn where first aid and medical services can be found. For first aid information on treating injuries when you cannot reach a health worker, see First aid for machine injuries. Also see Where There Is No Doctor: First Aid, for more information.

Write down as much information about each violent incident as possible. Make a detailed description of what happened. Include:

If possible, take a photo or video of the incident. This record will be helpful whether you keep it or use it to make a report to the boss, the police, or any agency that can help you. 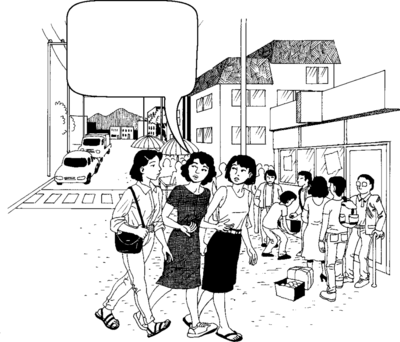 This street is safer. There are people around all times of day and night.
Collect information for a community map.

If you know of other workers being attacked, help them record attacks. Use a survey, workplace map, or community map to help you find out which workers are being threatened or attacked, where the attacks occur, when they occur, who committed the violence, and what kind of violence was used. This can give you better information to report or to use in planning how to prevent and resist violence against workers.

Respect workers’ decisions. If a worker does not want to report the abuse for fear of retaliation or further violence, respect her decision. But ask her if she would allow the incident to be recorded without her name or other identifying information. This information can be helpful in mapping where, how often, and in what situations violence happens. 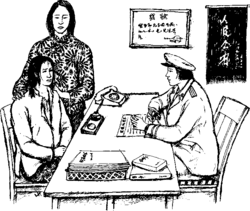 Get the local police to start a women’s desk, staffed day and night by women police officers trained to take action on sexual violence cases.

Practicing self-defense in a group can help you learn ways to defend yourselves if you are attacked. Invite someone from a local martial arts school to offer a workshop. The most important thing to learn is how to stop someone long enough for you to get away. If you continue with martial arts after that, you will be surprised at how quickly your skills increase. Self-defense groups are a good way of reaching out to more people and helping them gain self-confidence, as well as reducing the chances of being assaulted. If you are assaulted, hit the attacker as hard as you can. Do not be afraid to hurt him — he is not afraid to hurt you. 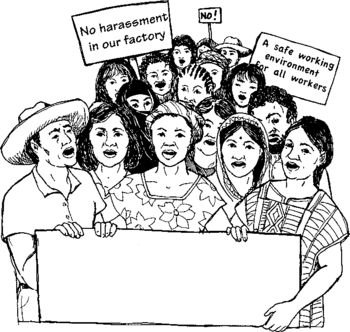 When women workers in your factory are being harassed by other workers or men in the community it might be harder for them to seek support from workers or worker organizations. Your group can take a stand against harassment even if nobody has reported a case to you.

Talking about harassment makes many people uncomfortable, especially in groups that include both men and women. Hold separate meetings to help women open up about their experiences. Ask the other participants to think of ways to support women who are dealing with harassment and violence individually, but to also make a plan to work collaboratively to reduce and stop violence and harassment at work and in the community.

There was a problem in our factory. Some men regularly made sexual remarks and jokes around the women workers. It was not just 1 or 2 men — it was a problem in most departments. Since the men are our co-workers, we wanted to take care of it ourselves, not get them in trouble with the boss.

We knew the men would not come to a meeting to discuss this. So we decided to bring it up at the next union meeting without putting it on the agenda. Because sexual harassment affects workers in so many ways, we knew we could find a way to raise it during debate on another issue.

I started with a story about how the jokes made me upset and sad. Two other women also had their stories ready. We did not accuse any worker by name. We focused on how the harassment affected us personally, and how disrespect divides workers and weakens the union.

After we told our stories, both men and women talked about harassment without feeling so guilty or defensive. Some of the men also confessed that the sexual jokes made them uncomfortable. Many of us now feel we can bring issues of sexual harassment to the group and the union will support us if we file a claim. Knowing other workers support us and understand the issues is important to us.

Just having a policy does not mean that violence will not happen. Working with other workers, labor groups, and government agencies can help you figure out the best ways to enforce a no violence policy. 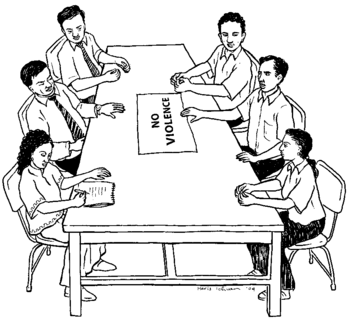 Find support in your stand against violence

Groups that organize against violence in the home and the community can help workers and unions build anti-violence campaigns in the workplace.

Other groups provide legal, social, and emotional support to victims of violence and their families. Ask them to help you and your co-workers. They may also have experience with medical and psychological recovery, dealing with authorities, and preparing to return to work. In addition to offering individuals emotional support, they may have ideas about how to build ongoing support groups to deal with violence at work and in the community.

We can overcome violence

My name is Chernklang Kreetha. I grew up in a rural area in Thailand but moved to Taiwan to find a job in a factory. The work conditions at that factory were not very good. After almost 3 years of working there, I got together with other workers in the factory to demand that the boss pay us for all the unpaid overtime, un-refunded taxes, illegal deductions from our wages, and forced savings that he kept. We thought we were going to win.

But a few days later, when we were leaving the factory for dinner, we were attacked by 8 thugs with clubs. The other workers managed to escape but I was trapped and beaten badly. They left me unconscious, lying in the street in front of the factory.

The other workers were shocked and scared, but more than anything, they were outraged that our boss would treat us like this. So the next day, they walked out of the factory, carrying signs that said “No to Violence,” and "We want our rights now!" in Chinese, English, and Thai.

We knew this would upset the boss more and he would try to hurt as again. So we asked for help at the Hope Workers’ Center. The Center protects and supports migrant workers in Taiwan. They housed us for a while to protect us and helped us organize to demand our rights.

After a lot of pressure, the company let us return to work and when we finished our 3-year contract, they gave us our back pay, taxes, and all the savings they had taken from us.

I did not think I had the courage to risk my life to get the rights I deserved, but the support from my co-workers, the community, and the Center helped me see that I was not alone and that we could win.

← PREVIOUS | NEXT →
Retrieved from "http://en.hesperian.org/w/index.php?title=Workers%27_Guide_to_Health_and_Safety:Protect_yourself_and_others&oldid=95451"