Just as violence usually includes a mix of behaviors, from yelling and humiliation to beatings and murder, sexual violence can include behaviors from unwanted attention and touching to rape and murder.

Sexual harassment is a big problem in many factories where most supervisors and managers are men and most workers are young women. In the community, women workers are also harassed by other workers, neighbors, and strangers. Often the harassment happens around the factory, particularly at the start and end of shifts or at lunch time.

People do not always agree about what sexual harassment is. One woman may be offended by a joke that makes another woman laugh. Some women feel harassed when strangers make comments about them on the street. Other women do not mind very much. Each person knows when she feels harassed, and how she feels is what matters. 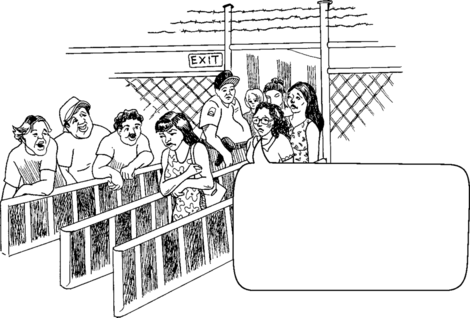 When we leave the factory at night, men are always hanging around at the gate. They stare at us and make sexual comments about our bodies. The guard does nothing.

In factories, the person who is harassing might demand sex in exchange for a job or a promotion. Harassers are often supervisors or other bosses who can fire a worker or make her job harder if she objects to being touched or refuses to have sex. Men harass women because they know they have more power than women. But men also harass each other, using jokes, insults, and threats intended to place another man in a woman’s role, so he will be considered to be less than a man. 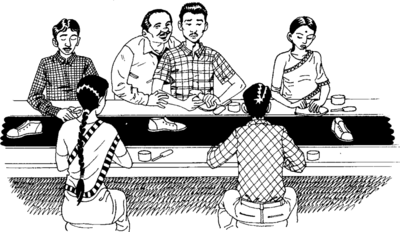 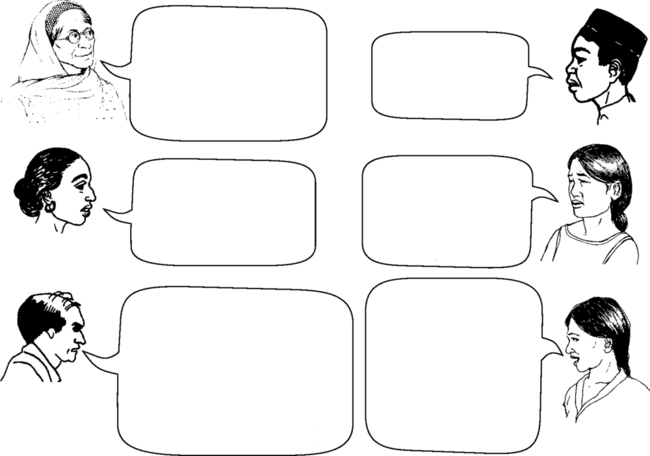 Some people say, "Sexual harassment is no problem."
It is natural for men to admire women’s bodies. These young women who work in factories like the attention and have many boyfriends.
If a man tries to become sexual with a woman, she must have done something to tempt him.
A woman’s world is inside the home of her family and husband. Women should serve their husbands and children. If a woman leaves the protection of her family to go into a man’s world, she should expect trouble.
We say, "Sexual harassment is wrong!"
Would you want your daughter or sister or mother treated like that?
Harassment has nothing to do with what women do, say, or look like. It is never justified.
We work to support our families. If we did not work we would not have enough money to survive. We should not be treated badly for trying to survive.

Apolinar had been harassing me at work for a few months. At first it was easy to ignore what he said to me, but after he became my supervisor he said we were going to marry and I would have his children. I was very clear that I was not interested, but he kept insisting that soon we would be together and he kept asking me out.

One day he tried to move me to an isolated job. When I refused, he got really angry and started yelling at me. I reported him to his boss, who said I had misunderstood Apolinar. Realizing he wasn’t going to help me, I went to the personnel manager. First he said, "You must stand up to him." Then he blamed me, saying he had seen me encourage Apolinar.

Since nobody at the factory would help me, I went to CEREAL, an organization that helps workers in Guadalajara, Mexico. They called the factory, but the managers did nothing to stop the harassment. So I resigned. When the people from CEREAL heard that I quit, they contacted the factory management again and this time they did something. They fired Apolinar and offered me a job at another plant. 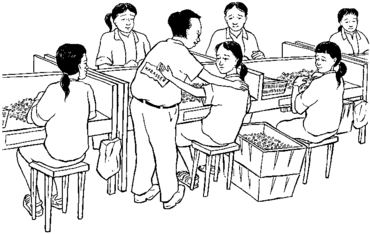 I have worked in a toy factory for 5 years. My supervisor would lean over me and touch my back and arms. I hated it but I was working and could not escape. It made very angry and uncomfortable. One day, when he came over to me, I reached my arm around him like I was patting him on the back. He did not realize I had put a sign on his back that said "Harasser!" I was so afraid he would get angry and fire me. But, when all the other workers and supervisors saw the sign and laughed at him, he got very embarrassed and stopped bothering me at my station!

If you are being harassed at work: 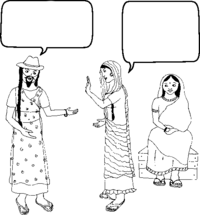 Come here, girl.
Leave me alone!
It can be difficult to confront a harasser and tell him to stop. You can feel more confident by practicing what to say with other people. A conversation with one person playing the role of another person is called "role play." You may also want to role play how to tell your husband or family about the harassment, or how to report it to your boss or the police.

Many policies in the factory put women at risk of being raped. Working alone in isolated parts of the factory, night shifts or leaving work late, lack of safe transportation to and from the factory, and an overall acceptance of domination and violence put women in danger. Rape is one of the worst kinds of sexual violence, because it affects women physically, sexually, emotionally, and psychologically, and it also affects their families and communities. Rape happens when men want to have power over women — it does not matter what women wear, how they act, or what they do. Rape is never the woman’s fault.

If you know someone who has been raped:

Someone who has been raped should see a health worker as soon as she can after the rape to get medical help and to record as much evidence as she can, especially if she is going to report the rape to the police. It is important that the health worker marks down everywhere that she is hurt. It may be helpful to document evidence of forced sex with photographs of bruises and other injuries. 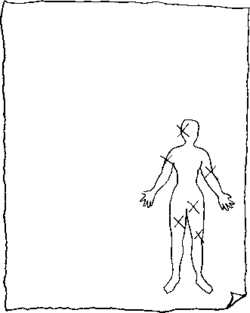 Governments are responsible for ensuring that workers are protected against all forms of physical, verbal, sexual, psychological, and emotional violence.

Sexual harassment is recognized around the world as a form of violence that hurts women and denies their right to live a healthy, dignified, violence-free life.

The UN includes "sexual harassment and intimidation at work" in the definition of violence against women. The Conventions that protect women against violence (see treaties.un.org) can be used to organize to stop sexual harassment at work.

The ILO says sexual harassment is a form of discrimination that undermines the integrity, dignity, and well-being of workers from many different communities, including women, youth, LGBT, and ethnic minorities. Sexual harassment also violates workers’ right to a safe, healthy workplace.

The Inter-American Convention on Violence against Women (A61) says:

Unions that belong to the the International Trade Union Confederation (ITUC) have an Action Program to combat sexual harassment in the workplace. All their member unions have agreed to:

In Ciudad Juarez, a Mexican city with many garment factories on the USA-Mexico border, around 400 young women have been raped and murdered in the last two decades. The police have investigated very few of these killings. For all these crimes, only 3 men were ever arrested; 1 died in the hands of the police and the other 2 were tortured to get them to confess.

Esther Cano Chavez, founder of Casa Amiga Crisis Center, believed the murders and the lack of government effort to solve them or protect women was predictable. "As women start to take factory jobs and become independent, men use violence to punish them for breaking social rules. Women organizers are particularly targeted." Although Esther died of cancer in 2009, Casa Amiga continues to offer hope for the future by helping and supporting women victims of violence.

Casa Amiga offers a 24-hour rape and sexual abuse hotline, medical services, legal advice, and psychological counseling. They also work to prevent violence in the home and to challenge inequality and discrimination. Casa Amiga campaigns for safer streets, safe public transportation, and police patrols of areas where women have been abducted. They also organize self-defense classes for women workers.

← PREVIOUS | NEXT →
Retrieved from "http://en.hesperian.org/w/index.php?title=Workers%27_Guide_to_Health_and_Safety:Sexual_violence&oldid=95445"