Problems of the Womb

HealthWiki > Where Women Have No Doctor > Chapter 24: Cancer and Growths > Problems of the Womb

Common growths of the womb

Fibroids are growths of the womb. They can cause abnormal bleeding from the vagina, pain in the lower belly, and repeated miscarriage (losing a pregnancy). They are almost never cancer.

Fibroids are usually found during a pelvic exam. The womb will feel too large or be the wrong shape. A test called an ultrasound, if it is available, can show how large the fibroids are.

If fibroids cause problems, they can be removed with surgery. Sometimes the whole womb is removed. But most of the time, surgery is not necessary because fibroids usually become smaller after menopause and stop causing problems. If monthly bleeding is heavy because of fibroids, anemia may develop. Try to eat foods rich in iron. 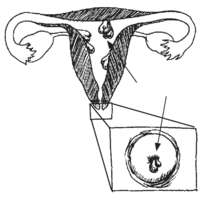 Polyps are dark red growths that can grow inside the womb or at the cervix. They are rarely cancer.

Polyps at the cervix can be seen and removed easily and painlessly during a pelvic exam by someone who has been trained. To find polyps inside the womb, the inside of the womb must be scraped out (this is called a D and C). The D and C also removes the polyps. The growth is sent to a laboratory to make sure there is no cancer. Once polyps are removed, they usually do not grow back.

Cancer of the womb

(Endometrial cancer, cancer of the uterus) 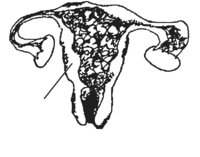 cancer
of the
womb

Cancer of the womb usually starts in the lining inside the womb (the endometrium). If it is not treated it can spread to the womb itself and to other parts of the body. This cancer happens most often to women who:

IMPORTANT! If you have any bleeding at all, even light spotting, after you have finished menopause (12 months without monthly bleeding), get checked by a health worker to make sure you do not have cancer.

Finding and treating cancer of the womb

To find out if a woman has cancer of the womb, a trained health worker must scrape out the inside of the womb with a D and C, or do a biopsy, and send the tissue to a laboratory to be checked for cancer. If cancer is found, it must be treated as soon as possible with an operation to remove the womb (hysterectomy). Radiation therapy may also be used.

In a hysterectomy, sometimes only the womb is removed and sometimes the tubes and ovaries are also removed. Since your ovaries make hormones that help protect you against heart disease and weak bones, it is always better to leave them in, if possible. Talk to a doctor about this.

If cancer of the womb is found early, it can be cured. If it is more advanced, curing it is more difficult.

IMPORTANT! Any woman who is over 40 years old and has unusual bleeding should get checked by a health worker.

← PREVIOUS | NEXT →
Retrieved from "http://en.hesperian.org/w/index.php?title=Where_Women_Have_No_Doctor:Problems_of_the_Womb&oldid=92063"