Intra‑ Uterine Devices (Devices that go into the womb)

HealthWiki > Where Women Have No Doctor > Chapter 13: Family Planning > Intra‑ Uterine Devices (Devices that go into the womb)

The IUD is a small object or device that is inserted into the womb by a specially trained health worker or midwife. Once in the womb, the IUD prevents the man’s sperm from fertilizing the woman’s egg. The IUD can stay in the womb for up to 10 or 12 years (depending on the kind of IUD it is) before it must be removed and replaced. An IUD can be used without the man knowing you are using it (although sometimes a man can feel the strings).

The most common IUDs are made of plastic, or plastic and copper.

Progestin IUD (Mirena, Levonova)
This kind of IUD also contains the hormone progestin and is available in some countries. Progestin decreases the pain and bleeding that some women have with the IUD. It protects against pregnancy for 5 years.
IMPORTANT! IUDs do not protect against STIs, including HIV. And if a woman has an STI, the IUD can lead to more serious complications, such as pelvic inflammatory disease (PID). PID can lead to infertility.

IUDs can be used safely by women who are breastfeeding.

Do not use an IUD if you are unable to get to a health center or clinic where you can have the IUD removed if necessary.

Do not use an IUD if you:

Wait for at least 3 months before using an IUD if you have had an infection in your tubes or womb, or an infection after giving birth or after having an abortion.

You may have some light bleeding during the first week after getting an IUD. Some women also have longer, heavier, and more painful monthly bleeding, but this usually stops after the first 3 months.

How to use the IUD:

An IUD must be inserted by a specially trained health worker after doing a pelvic exam. The best time to have the IUD put in is during your monthly bleeding. After childbirth, it is best to wait 6 weeks for the womb to return to its normal size and shape before getting an IUD. Occasionally an IUD will slip out of place. If this happens, it will not be effective in preventing pregnancy, so it is important to learn to check your IUD to make sure it is still in place. 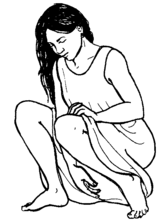 Most IUDs have 2 thread-like strings attached which hang down into the vagina. You should check the strings after each monthly bleeding to make sure the IUD is in place.

How to check the IUD strings:

Warning signs for problems with an IUD:

Pelvic inflammatory disease is the most serious problem that can result from having an IUD. Most infections happen in the first 3 months, usually because the woman already had an infection when the IUD was put in. Or it may happen because the health worker did not put in the IUD under clean conditions.

If you have any of the following signs, you should see a health worker trained to insert IUDs and to treat complications, or go to a hospital immediately:

To stop using an IUD:

When you want to stop using an IUD, it must be removed by a trained health worker. Never try to remove an IUD yourself. You can become pregnant as soon as it has been removed.

← PREVIOUS | NEXT →
Retrieved from "http://en.hesperian.org/w/index.php?title=Where_Women_Have_No_Doctor:Intra‑_Uterine_Devices_(Devices_that_go_into_the_womb)&oldid=92792"