Barrier methods prevent pregnancy by blocking the sperm from reaching the egg. They do not change the way the woman’s or man’s body works, and they cause very few side effects. Barrier methods are safe if a woman is breastfeeding. Most of these methods also protect against STIs, including HIV. When a woman wants to become pregnant, she simply stops using the barrier method.

The most common barrier methods are the condom, condoms for women, the diaphragm, and spermicides.

If a condom breaks or comes off the penis, the woman should put spermicide in her vagina immediately. If possible, use emergency family planning.

The condom is a narrow bag of thin rubber that the man wears on his penis during sex. Because the man’s semen stays in the bag, the sperm cannot enter the woman’s body.

Condoms are the best protection against STIs and HIV. They can be used alone or along with any other family planning method. Condoms can be bought at many pharmacies and markets, and are often available at health posts and through HIV prevention programs.

Be careful not to tear the condom as you open the package. Do not use a new condom if the package is torn or dried out, or if the condom is stiff or sticky. The condom will not work.

The condom must be put on the man’s penis when it is hard, but before it touches the woman’s genitals. If he rubs his penis on the woman’s genitals or goes into her vagina, he can make the woman pregnant or can give her an STI, even if he does not spill his sperm (ejaculate).

How to use a condom:

Lubricants make the vagina or the condom wet and slippery. They help keep condoms from breaking and can make sex safer and more enjoyable. Lubricants should be water based, such as spit (saliva), or K-Y Jelly. Rub the lubricant on the sides of the condom after it is on the hard penis. A drop of lubricant inside the tip of a condom can also make it feel better for the man. Do not use cooking oils, baby oil, mineral oil, petroleum gel, skin lotion, or butter. They can make the condom break easily.

A woman who is using another family planning method should also use condoms if she needs STI protection.

encouraging your partner to use condoms

At first, many couples do not like to use condoms. But once they get used to it, they may even recognize benefits besides protecting against unwanted pregnancies and STIs. For example, condoms can help some men last longer before they come.

The condom for women (female condoms)

Female condoms are larger than condoms made for men and are less likely to break. They work best when the man is on top and the woman is on the bottom during sex.

A female condom, which fits into the vagina and covers the outer lips of the vulva, can be put in the vagina any time before sex. It should be used only once, because it may break if it is reused. But if you do not have any other condoms, you can clean it and reuse it up to 5 times. The female condom should not be used with a male condom.

The female condom is the most effective of the methods controlled by women in protecting against both pregnancy and STIs, including HIV. There are now 3 types of female condom available. The newest are less expensive. The VA female condom fits more closely to the woman’s body, so it is more comfortable and makes less noise during sex.

Female condoms are available only in a few places now. But if enough people demand this method, more programs will make them available.

How to use the female condom:

When a diaphragm is used correctly, it prevents pregnancy most of the time and may also give some protection against STIs.

The diaphragm is a shallow cup made of soft rubber or thin silicone that a woman wears in her vagina during sex. The diaphragm covers the cervix so that the man’s sperm cannot get into her womb. The diaphragm should be used with spermicide. If you do not have spermicide, you can still use the diaphragm, but it may not work as well to prevent pregnancy.

Diaphragms come in different sizes, and are available at some health posts and family planning clinics. A health worker who has been trained to do pelvic exams can examine you and find the right size diaphragm.

Diaphragms can get holes, particularly after being used for more than a year. It is a good idea to check your diaphragm often. Replace it when the rubber gets dry or hard, or when there is a hole in it.

How to use a diaphragm:

You can leave the diaphragm in for up to 24 hours. It is OK to use the diaphragm during monthly bleeding, but you will need to remove it and clean it as often as you would change a cloth or pad.


To remove the diaphragm:
Put your finger inside your vagina. Reach behind the front rim of the diaphragm and pull it down and out. Wash your diaphragm with soap and water, and dry it. Check the diaphragm for holes by holding it up to the light. If there is even a tiny hole, get a new one. Store the diaphragm in a clean, dry place.

Spermicide comes in many forms—foam, tablets, and cream or jelly—and is put into the vagina just before having sex. Spermicide kills the man’s sperm before it can get into the womb.

If used alone, spermicide is less effective than some other methods. But it is helpful when used as extra protection along with another method, like the diaphragm or condom.

Spermicides can be bought in many pharmacies and markets. Some women find that some types of spermicides cause itching or irritation inside the vagina.

Spermicides do not provide protection against any STI. Because spermicides can irritate the walls of the vagina, they may cause small cuts that allow HIV to pass more easily into the blood.

When to insert spermicide:

If more than one hour passes before having sex, add more spermicide. Add a new tablet, suppository, or applicator of foam, jelly, or cream each time you have sex.

How to insert spermicide: 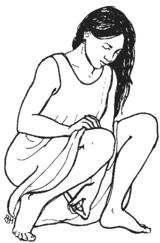 ← PREVIOUS | NEXT →
Retrieved from "http://en.hesperian.org/w/index.php?title=Where_Women_Have_No_Doctor:Barrier_Methods_of_Family_Planning&oldid=95230"