HealthWiki > Workers' Guide to Health and Safety > Chapter 19: Working too much, too fast, for too little > Low wages keep people in poverty

I can't afford to live in a place with clean water, schools, and clinics nearby. I can barely feed and clothe my family!

Low wages keep people in poverty. If the harder you worked, the more money you earned, then export factory workers would be among the richest people in the world. But workers in export factories live in poverty. Employers pay workers as little as they can and lobby governments to keep the minimum wage as low as possible. Though it may be illegal, factory owners often pay less than the minimum wage, and refuse to pay bonuses, overtime, or social security benefits. Since governments want companies to build factories and stay in their countries, they rarely enforce laws regarding wages, hours, benefits, or working conditions.

When companies pay workers barely enough money to survive, they deny them the right to a healthy, dignified life.

Not paying full wages and benefits

Many employers do not fully pay even the low wages the law requires. Some do not pay minimum wage or a higher wage for overtime hours, for all the hours worked or all the pieces made. Legally required bonuses for attendance, holidays, and festivals may be unpaid. And workers are fined for breaking factory rules. Sometimes factories schedule vacations during holidays to avoid giving holiday pay — this is not legal.

Some employers deduct health or other social security payments from workers’ pay but do not pay it into the social security system. This means workers take home less money but also cannot get the health care and other benefits they have paid for and deserve.

Even where workers’ pay is not set by the piece, high production targets must be met before the shift is allowed to end.

If an employer requires workers to work overtime, punishes workers by forcing them to work extra hours, or locks workers in the factory to finish a job, this is forced labor. Forced labor violates national and international human rights laws and worker rights agreements.

In the factory where I work in Kenya, if you do not meet your target, you are not allowed to leave. Sometimes we work all night with only short breaks.

International companies (brands) force overtime on factories they contract by demanding production schedules that are almost impossible to meet. In search of ever lower costs, they drive a system in which factory owners keep wages as low as possible to ensure their profits. Most of the time, wages are not enough to support one person, let alone a whole family, so workers are forced to depend on extra pay from overtime work and bonuses.

The roles of the UN, ILO, and other international organizations that promote workers' rights are explained in Appendix A.

A piecework pay system, where employers pay workers by the piece instead of by the hours or days worked, allows employers to pressure workers to work faster and longer than may be legally allowed, even if they are tired, injured, or ill.

Piecework pay is often set so low that workers must work overtime just to make enough money to survive. If workers complain, bosses threaten them with losing their overtime or their job. They punish workers by not letting them drink water, eat, or go to the toilet. Sometimes, they even lock the doors or gates to force them to keep working! 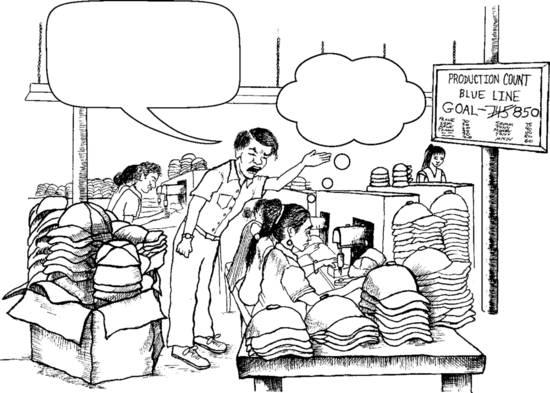 Lazy girl! You complain about pay but you don’t work so hard. Do more pieces and you will have more money!
After I meet the quota, they just raise it again!

Paying some workers less than others

Bosses discriminate against some workers— women, indigenous people, migrant and child laborers — by paying them less than others doing the same work. Although women workers are often a majority, they may not be promoted to better paying jobs, even if they can do the job well.

Another way employers keep people in poverty is by hiring workers for only a short time. They may hire workers when there is a lot of work and fire them when there is not. Employers often contract temporary agencies to provide these workers to avoid the legal responsibilities of being the direct employer.

This system stops workers from getting benefits the law may give to permanent workers. Because contract and temporary workers come and go, it also hides illnesses and injuries caused by work, and makes it harder for workers to organize for better, safer conditions.

Working to pay off debt

Getting paid too little means workers do not have enough money to save, for emergencies, or to pay for things they need. Stores in and around the factory often let workers purchase goods on credit but charge high interest rates. Employers, banks, and loan sharks charge high rates for loans. Workers owe so much in interest that when they settle accounts they have even less money to live on. Then they have to buy more on credit or take out another loan!

Migrant workers also become victims of the debt system. Recruiters charge a lot of money to get them jobs in other countries. Workers begin paying their debt when they arrive. But recruiters and employers often demand more money, charge high interest, or change the rules. Some workers get trapped in a system that never lets them pay off their debts. This is called "debt bondage."

Savings groups help workers get out of debt

Kavita had been working for a long time to pay off a loan from the boss, but her debt did not seem to go down. Many women were in the same situation. One day, an organizer from the group Sankalp talked with them about their debts and about finding a way to pay them off. The organizer proposed that they start a savings group. If 10 women worked together, they could save up to 1 rupee a week, she said. The organizer would help them set up a bank account. If they saved regularly, the bank could also give them a loan, with much better conditions than the boss.

The women got organized and saved 1 rupee a week. After 3 months, they had enough to pay the debt of 1 woman and chose Kavita. The women, including Kavita, kept saving and every few months they paid somebody else’s debt. After paying all 10 women’s debts, they kept saving money to give loans to each other instead of going to the boss or the bank. Now they are better prepared to pay for emergencies than ever before.

You should be able to find out if you have received all the pay you have earned. This activity will help you to: 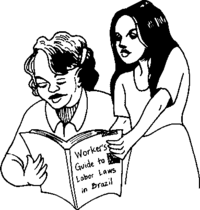 Calculate your pay. With the record of pieces you made, or the days and hours you worked, you can calculate how much money you are owed.

Create a form (or use a calendar) to record hours worked and time off. Add columns (see the example below) to fit your situation. For example, add a column to record the number of pieces you made or for bonuses.

Whether you are paid by the hour or by the piece, your employer must pay you at least the legal minimum wage plus extra pay for overtime hours. The pay rates below are only examples.

If you get paid by the time you worked:

If you get paid piece rate:

Get your full pay

Compare your time log and pay sheet with your paycheck every pay period. If you find that you are not getting as much as you calculated:

The boss says he’ll pay what he owes me next week. He has said that before. What should I do?

The minimum wage is not enough!

I work in a TV factory in Ciudad Acuña, Mexico where I earn a little above the minimum wage. During one of our trainings with the Comité Fronterizo de Obreras (CFO) we did an activity to determine our sustainable living wage. We looked at our weekly expenses, divided into "things we need to survive" such as basic foods, clean water, and hygienic products, "things we need to pay each month" like electricity, rent, and transportation, and "things that we need to have a dignified life," which included more nutritious and varied foods and school fees. When we compared how much we needed each week with how much we earned we saw that even if we bought the cheapest brands of everything and did without a lot of things, we only earned about 25% of what we needed! We actually need 4 to 5 times the legal minimum wage in order to cover our most basic monthly expenses. The CFO is now working to raise the minimum wage so that working full time at minimum wage is enough for a worker to sustain her family and live a healthy life.

How much do you need to cover all your expenses?

← PREVIOUS | NEXT →
Retrieved from "http://en.hesperian.org/w/index.php?title=Workers%27_Guide_to_Health_and_Safety:Low_wages_keep_people_in_poverty&oldid=91221"