A living wage is a human right

HealthWiki > Workers' Guide to Health and Safety > Chapter 19: Working too much, too fast, for too little > A living wage is a human right

The minimum wage should be enough money to cover basic needs — a place to live, water, and food for a worker and her family. But people need to do more than just survive. We need a decent home, enough healthy and nutritious food for our families, and to earn enough to pay our monthly bills as well as save for bigger purchases or emergencies. A living wage allows workers and their families to break the cycle of poverty and illness and live a healthy life.

The UN Universal Declaration of Human Rights says everyone has the right to a standard of living that allows for their health and well-being, including food, clothing, housing, medical care, and social services.

The ILO Minimum Wage Fixing Convention (No. 131) says governments must:

While the ILO requires governments to set a minimum wage, each country decides what that is. Check your country’s labor laws.

The roles of the UN, ILO, and other international organizations that promote workers' rights are explained in Appendix A.

To lure international companies with low prices, factories move from city to city and country to country searching for places where regulations are lax and they can pay the lowest wages. Tired of this "race to the bottom," workers all over Asia got together to launch the Asia Floor Wage Campaign.

They calculated how much a worker in each country must earn to support her family by working no more than 48 hours a week. They set the Asia Floor Wage to be the same for all of Asia so large companies would no longer move in search of the lowest wages. Some workers and unions have used the Floor Wage to negotiate for better pay with factory owners and managers, and to pressure the brands to change policies that strive only for low cost instead of the well-being of workers.

How can you organize against working too many hours when you have so little time already? Here are some strategies that work: 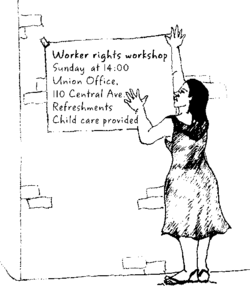 Workers win a day off

We make Nike shoes at the Sinotex factory in Sri Lanka. The boss had us working 7 days, with no days off even though the labor law in Sri Lanka entitled us to 1 day off every week.

When the union and other members of the Workers Council demanded our rightful day off, the boss refused! 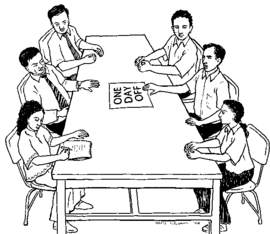 We told all the workers about the law and Nike’s code of conduct, which also said we had the right to 1 day off every week. We got organized and threatened to report the boss to Nike. The Nike auditor had visited our factory and didn’t give it a good score, so the boss didn’t want to lose any more points. He was scared of losing the Nike contract, so after 1 month of campaigning, he agreed to give us the 7th day off.

Some workers are happy we get Sunday off, but some aren’t because wages are still too low. We agreed to organize to raise our wages!

In factories where workers have fought for and won a collective contract, they are often able to bargain for better salaries and fairer working hours. Forming a union or worker association is often the best way to get a good collective contract, overtime, and fair pay. 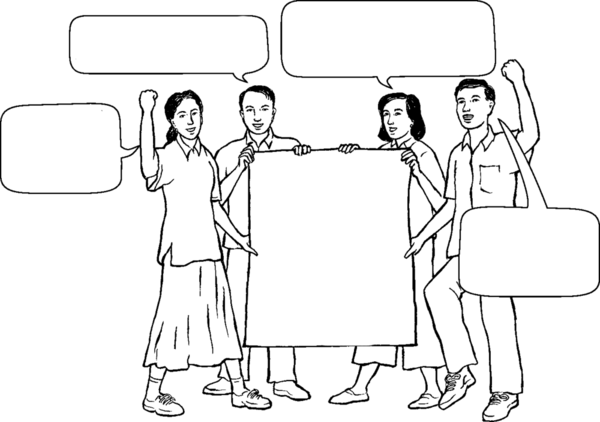 Now we all get one day off each week!
When we work overtime we get overtime wages.
The employer must give us 1 day’s notice when he expects overtime.
The employer cannot force us to work longer hours.
CONTRACT
Regular hours:
8 hour day
40 hour week
Overtime:
Higher pay
for extra hours
No forced overtime
Higher pay
for night work
When you negotiate a collective contract, you and the employer agree to honor it.

Labor laws in many countries set limits on working hours and overtime. Unfortunately, many export factories may be exempt from these laws, especially inside special export processing zones. Whether the laws apply to your factory or not, a campaign for fair working hours might bring enough pressure to make the factory honor them.

If the labor laws are weak or there are none regarding wages or working hours, your campaign might pressure the government to create and pass laws to protect workers and limit working hours. International agreements your country has signed on labor and human rights standards can be useful to your campaign, even if these standards have not been implemented. See Appendix A: Laws and the struggle for decent, healthy, and fair work.

Workers organizing their factories often gain strength by joining with community groups and non-governmental organizations (NGOs), such as women’s, religious, environmental, or human rights groups. Discussing problems in the community caused by low wages and long workdays can help build support for workers and help generate ideas to improve conditions for everyone in the community. Use the But why? activity to help figure out what the underlying problems and solutions are. Worker and community groups have organized many kinds of projects.

Because employers and the brands sell their products all over the world, many worker organizations have involved groups in other countries in campaigns to increase wages, force companies to pay the wages and benefits they owe workers, and recognize their unions. (See Could an international campaign help? for more information.)

How we won against forced overtime

Workers from other garment factories ask us how we got the freedom to leave at 4:30 pm and not work forced overtime. When people find out that we organized our own union and that we were successful, they feel like it is possible to fight for better conditions, and they want to know how we did it. 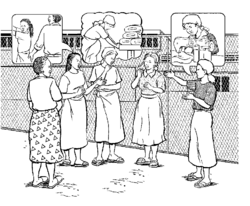 Share experiences with other workers
We work at the Choi Shin and Cimatextiles factories in Guatemala. Both of these factories are owned by the same Korean company and are right next to each other. Many people worked there under bad conditions. Besides the low pay and the mean bosses, they also forced us to work overtime, even when we did not want to. Some of us got together outside of work to talk about the conditions in the factory. We talked about everything, from how the bosses treated us at work, to how much we are paid, to how often we were forced to work overtime. After everybody got a chance to talk, we decided that the biggest problem we shared was forced overtime and low pay. 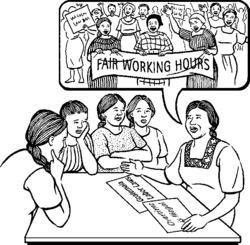 Organize a workers’ group
At first most of us did not want to take action against the boss because we were afraid we would lose our jobs. But when we found out that forced overtime was illegal in Guatemala, we started organizing small groups of workers in neighborhoods outside the factory. After 1 year, we had organized 1,250 workers from the two factories. We all agreed to form an independent union. 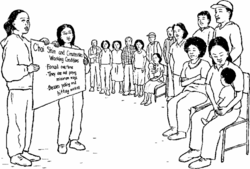 Bring attention to the problem
We made the community aware of what was happening in the factory. The bosses responded with death threats, violence, bribes, and even rape to intimidate the leaders and break our unity. Twice, supervisors led non-union mobs to threaten and attack us, but we found support and protection in the community. 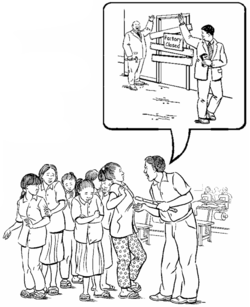 Build national and international support
Our union reached out to other unions and organizations in Guatemala and other countries. We wrote to the brands. They put pressure on the boss to improve our working conditions. To keep his customers, the boss had to sign an agreement acknowledging our union.

But the boss went back to harassing the union leaders, threatening to close the factories and move to China. But we kept working and organizing. After 2 years of struggle, the government was pressured by local, national, and international organizations to enforce the law. The government told the factory owner that he had to sign a collective bargaining agreement with us, rehire fired union workers, and address our complaints.

Win some, lose some
Although we won higher pay and no more forced overtime, we still struggle with the boss who hates our union and threatens to close and move the factories. But we are proud to be among the first unions in Guatemala to have a collective contract!

For a step-by-step description of how to organize a campaign, see Plan campaigns around the most important problems.

← PREVIOUS | NEXT →
Retrieved from "http://en.hesperian.org/w/index.php?title=Workers%27_Guide_to_Health_and_Safety:A_living_wage_is_a_human_right&oldid=91235"