Worker health problems have many causes

HealthWiki > Workers' Guide to Health and Safety > Chapter 2: Learning and teaching about health at work > Worker health problems have many causes

Workplace problems have many causes. By observing and discussing the problems, you can identify some immediate causes, but you may have to dig deeper to find the underlying causes.

Workplace problems are often like that river. Work dangers, like the man dumping his trash, are among the causes that are easier to see and to change. However, as you keep following the river upstream you find causes which are more complex. To solve workplace problems we must address the social, political, and economic issues that cause them: companies that favor profit more than people, social problems such as racism, discrimination and violence against women, and structures of power and government in our countries and communities. 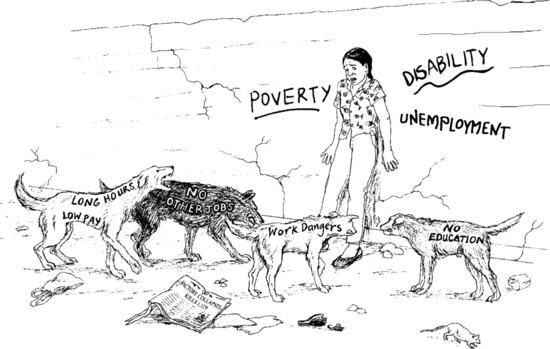 Juanita was a sewing machine operator for 5 years. In the factory, her hands moved lightning-fast as she repeatedly sewed seams about 800 times each day.

As she sewed, her fingers and hands grasped, pinched, twisted, pushed, and pulled clothing parts, bundles, bins, and tools. She worked 10 hours each day, 6 days each week, sometimes more. Although the pace of work was already fast, her supervisors constantly pushed her to do more.

Her wrists and forearms had been sore for several years, but since she could still work, she did not worry. She knew the pain came from her work because on holidays when she took time off to visit her family, her hands began to feel better. Eventually, the pain got so bad she could not sleep. As her hands grew weaker and more painful, it became harder for her to carry water, prepare food, and do other house chores.

She knew other workers had pain like hers. No one knew what to do other than hope it would go away. When she asked to see the doctor, her supervisor said, "No. Get back to work." She finally went to a doctor after work. He told her to rest and take pills for the pain. She could not afford the pills, but she bought them anyway. The pills helped her work for 2 more months. Then the pain slowed her down so much she could not make the quota and she was fired.

Why can our boss push us so hard?
Why must we work so fast?
Why do we keep getting hurt?
Why are there only bad jobs?

Juanita does not know how she will survive. She has no other job skills besides sewing. She only went to school for a few years because in her family, only the boys stayed in school and learned other work skills. She could clean houses, but that pays even less than sewing and is hard work too. She hopes rest will heal her hands so she can return to sewing soon.

Talking about all the causes of a problem helps workers find more ways to solve the problem and prevent it from happening again. Workers can talk about which causes are the most important, which causes they can change, and who might be their allies to help them change other causes. Different workers will ask different questions and come up with different answers. The questions and answers for your situation will grow out of your own conditions.

Group the answers to the "But why?" activity to make it easier to see the causes of Juanita’s problem. For example, group causes into "work conditions," "social causes," and "political and economic causes." Create your own groups of causes. 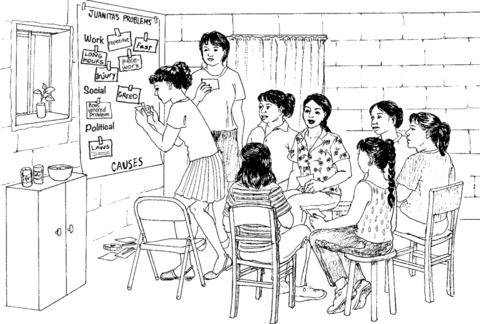 Social causes of health problems for workers are attitudes, customs, and behaviors that deny workers’ rights and dignity, such as low pay, harassment, and discrimination. Women workers are especially affected by social causes.

← PREVIOUS | NEXT →
Retrieved from "http://en.hesperian.org/w/index.php?title=Workers%27_Guide_to_Health_and_Safety:Worker_health_problems_have_many_causes&oldid=95423"