HealthWiki > Where Women Have No Doctor > Chapter 19: Rape and Sexual Assault > Working for Change

To create a world in which rape does not happen, we need to work toward having:

But until we achieve these goals, we need to find ways to help women who have been raped.
We can: 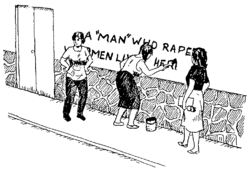 In a small town in El Salvador, the police refused to stop a known rapist because he was the son of a wealthy man. So the women of the town began painting the word ‘rapist’ outside his house. His family was so ashamed that they forced him to stop.

How a community in South Africa organized against rape

Early one Saturday morning, a 59-year-old woman was raped and stabbed by a man who had raped other women in the past. The victim pointed the rapist out to the police. He was arrested and the woman was taken to the hospital. But the police released the rapist the same afternoon. He was not charged with rape or assault—he was free.

We women of the township were very angry. The police had protected a man who made women afraid to walk alone on the streets. The township’s women’s organization decided to organize a protest.

Most of us work as domestic servants for rich white women who live in a nearby city. So all of us stayed away from our jobs, demanding that the police charge the rapist with rape and assault, before we would go back to work.

We also asked the women we worked for to come to speak with us. We wanted to show and tell them about our problems. We know that all women, black and white, fear rape. We felt the white women might understand and be sympathetic to us. We also wanted the women whose husbands worked for the police to explain our problems to their husbands and how bad it was for them to release a violent rapist back into the township.

But the white women were not sympathetic—they just got angry. We think they were upset because they had to do their own housework. When the Employers’ Federation came to see about the protest, we told the men, “Please do not speak for us. This is a women’s problem. Men do not get raped.” The Employers’ Federation would not meet with us, but after a week, a group of white women came to talk to us. We showed them around the township, and they decided to meet with us again. We called off the protest, even though the rapist was only charged with assault, and not rape. But people in the township were so angry that the rapist could no longer live there.

It is very important to talk openly about the problem of rape. Most people don’t talk about rape—they feel ashamed and shy. Often the family of the raped girl or woman does not want to talk about it.

But here it is different. We started organizing in the community for education, child care, pensions, and so on. We started talking about all the problems and things that we need to change. So we talk about rape, and any sexual assault on a woman. People now see sexual assault as another kind of oppression. Men and women think the same about this; we are united in the struggle.

A raped woman is trusted. If she says she was raped, we support her, no matter who she is. Even if she is a drunkard, a rape is still a crime against her. In fact, it is worse because she was in a weak position. Our women and men do not blame a woman for a rape. We do not say that the rape was the woman’s fault. So women can talk about sexual violence openly and they will get community support. 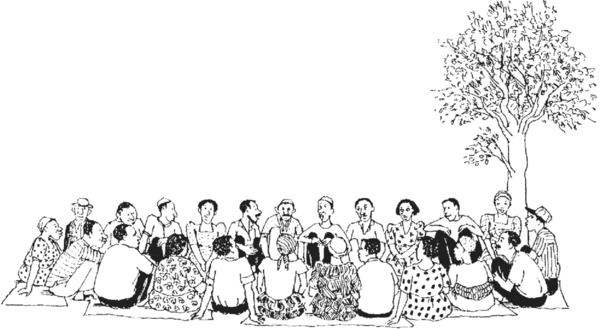 ← PREVIOUS | NEXT →
Retrieved from "http://en.hesperian.org/w/index.php?title=Where_Women_Have_No_Doctor:Working_for_Change:_Rape_and_Sexual_Assault&oldid=91984"