Most women who sell sex would rather have a job that pays well and that gives them dignity and respect.

Many people think women become sex workers because they are immoral or too lazy to find other work. But most women do so because they need money and have no other way to earn it. These women need money for food and shelter, to support their children and families, to pay debts, or to buy drugs.

This desperate need often arises in situations a woman cannot control: for example, her husband dies, or she gets divorced, or her husband or family abandons her. Or she may be raped or have an unplanned pregnancy and find that no one will marry her. If she has no job skills or ways to get money, she sells the only thing she has—her body—in order to survive. 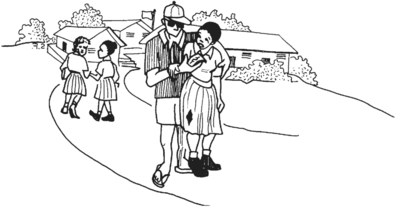 This young girl did not have enough money to be able to finish her education. She cannot find a job, so she must sell sex to buy food and clothes.

Story of a poor woman

Every morning around 9 o’clock, Nawal (not her real name) steps out of the tiny room she shares with her husband, locks her two small children inside, and walks to the wealthy area of town where she ‘works’. Wearing a traditional dress with faded colors and a cheap black scarf thrown loosely around her head, she looks just like any other poor woman you see everywhere in Cairo, Egypt. She is not. Nawal is 20 years old and she is a prostitute.

‘Working’ a certain street until it is time to go home around 2 or 3 in the afternoon, Nawal earns an average of L.E. 20 (US $6) a day. She does not work on Fridays or religious holidays so she can spend time with her family: her husband, who works occasionally as a construction worker, a 4-year-old son, and a 1-year-old daughter.


Nawal’s father was blind, and he made money by begging in central Cairo. When she was a young girl, Nawal spent more time in the street guiding her father around than at home. She never saw her mother. At 13, she got married.

Two years later, after giving birth to her first child, Nawal had to look for a job. Her husband was getting less and less work. With no education or skills, she tried working as a house cleaner in an apartment building. But she stopped when the building guards refused to introduce her to customers unless she had sex with them.


Nawal does not use the word ‘prostitute’ to describe herself. She refers to herself as a servant. She knows she has to save money for her children: “I want my children to go to school so that they don’t grow up to be criminals.”

Because her work is not considered ‘real’ work, Nawal, and thousands of women like her, get no help from the government or the police. Nawal has been robbed several times, but no one would help her. Officially, she does not exist. And the thing that really puzzles her is that a lot of people think that she enjoys sex work. She does not. She just does not know any better way to survive.
—from an interview by Ahmed Badawi

Because many men fear they will become infected with HIV when they have sex with older sex workers, there is an increasing demand for younger girl children to work in the sex trade.

Other women are forced into sex work. Often women are tricked into thinking they are going to get jobs or rich husbands in other countries and are sold into sex work instead. Then it is almost impossible to stop selling sex. The woman may be in a new country illegally where she has no rights, no money, and no way to return home. She may have large debts to repay, or her employer may threaten to hurt her if she leaves. She has become a sexual slave.

← PREVIOUS | NEXT →
Retrieved from "http://en.hesperian.org/w/index.php?title=Where_Women_Have_No_Doctor:Why_Women_Become_Sex_Workers&oldid=92000"