HealthWiki > Where Women Have No Doctor > Chapter 20: Sex Workers > Working for Change

In order to get more men to use condoms, men must believe that it is in their own interest and that of their sex partners to prevent STIs, including HIV. This kind of education is best done at the community level.

As a sex worker, you can help by joining together with other sex workers to make condom use the expected or normal practice. Then clients will begin to want to use condoms. 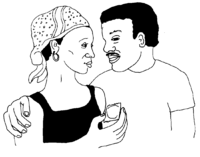 When you are with clients, your attitude is important. If you believe in yourself and know what you are talking about, you are more likely to convince a man that condom use makes good sense. Here are some ideas:

– protect him as well as you from disease.

– make him less likely to pass on STIs to his wife.

A sex worker in Duala, Cameroon, tells how she and her co-workers protect themselves:

In the discotheque where I work, we understand the risk to our health and our lives from HIV and AIDS, so all the girls are given condoms. We teach our clients that it is in their own interest to protect themselves. Most clients now agree. We make sure that the act will be enjoyable, so they will come back for more.

But there are always those men who think that by not using condoms, they are being ‘real men’. That going ‘live’ is getting the real thing. We almost always find that after a guy has tried without luck to get 4 or 5 of us to have unsafe sex, he will either just leave or agree to see if he can have just as much pleasure with a condom on. If he insists on unsafe sex, we gather together and chase him out!

We do not like to lose clients, but we value our lives and our health. Slowly, things are changing. Where we work, using condoms has become the smart thing. 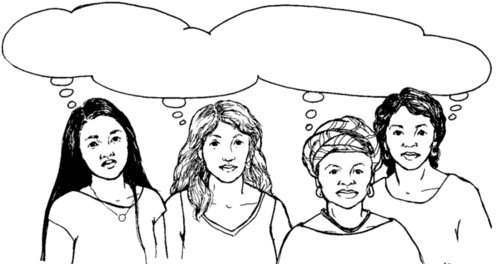 DECENT INCOME
FOOD + SHELTER
FREEDOM FROM VIOLENCE
PROTECTION FROM STI'S + HIV
Sex workers are organizing to improve their lives.
They want the same things as other women.

“I used to work in a club where we didn’t always use condoms. There was a lot of pressure NOT to. So I left. Now I work in a house where condoms are the RULE. It saves me a lot of worrying and arguing.” —Anita

Because of their low status as poor women and as sex workers, women who sell sex sometimes feel unworthy and unable to change their lives. Working alone, it can be very difficult for a sex worker to make her clients use condoms, or to protect herself from violence.

But in many places sex workers have learned that by working together they have more power to make the changes necessary to improve their lives. In some places sex workers are organizing to improve their working conditions, by insisting that their clients use condoms, or organizing against rough treatment from police. In other places, sex workers with the help of others in their community have started programs to learn new skills so they will be less dependent on sex work.

Here are some ideas that sex workers from around the world have shared about how they are working together and working with others to make their lives better.

Teach each other how to make your work safer. You can get a group of sex workers together to talk about:

Organize for greater safety. Working together and supporting each other can help sex workers reduce the threat of violence from clients, police, and pimps. Join with other sex workers to plan how you can support and protect each other. 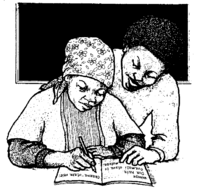 Learn new skills. You can work to organize programs that teach reading and writing or job skills. Sometimes sex workers can teach each other new skills, or it may be possible to get help from people in your community who can be teachers. 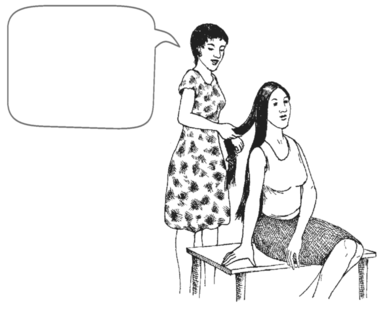 I told him 'No condom, no sex' and now that I earn some money doing hair, I can say 'no' and still pay my bills.

When a sex worker has other skills, she can earn some money doing other jobs. She then has more choice over which man to have sex with, or she can refuse a client if she does not feel safe.

Create a loan fund. A group of sex workers in Nairobi, Kenya, joined their money to create a loan fund for their members. Many use the fund to pay their children’s school fees. Other groups have used loan funds to help each other set up small businesses so they can earn money in other ways besides sex work.

Many groups of sex workers are trying to change the negative ways other people think about them. For example, a sex workers’ organization in Calabar, Nigeria does not allow members to fight in the streets or in the brothel. Members are also not allowed to use language or wear clothes that may offend the community. By changing the things that had made it easy for the community to criticize sex workers, they hope that people will begin to understand that sex workers are just women doing a job to survive.

The community can help 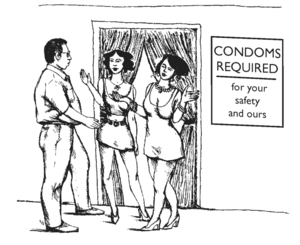 Community members can help sex workers to organize for safer working conditions. You can:

You can also work to prevent children from being sold or forced into sex work:

To the health worker

You can make the biggest difference in the life of a sex worker by helping her to get the care she needs:

← PREVIOUS | NEXT →
Retrieved from "http://en.hesperian.org/w/index.php?title=Where_Women_Have_No_Doctor:Working_for_Change:_Sex_Workers&oldid=91983"