Use and Misuse of Alcohol and Drugs

HealthWiki > Where Women Have No Doctor > Chapter 28: Alcohol and Other Drugs > Use and Misuse of Alcohol and Drugs

Why do people begin to use alcohol or drugs?

People often begin to use alcohol or drugs because of social pressure. Boys and men may face pressure to drink or use other common drugs to prove their manhood. A man may believe that the more he drinks, or the more drugs he uses, the more manly he is. Some people also use alcohol and drugs because they like how they make them feel.

Many girls and women are also beginning to face social pressure to start drinking or using drugs. They may feel that they will appear more grown-up or more modern. Or they may think they will be accepted more easily by others.


Companies that make and sell alcohol and drugs use social pressure, too. Advertisements that make using drugs and alcohol look glamorous, especially to young people, encourage people to buy them. And when companies that make alcohol, or places that sell alcohol, make it seem easy and even fun to buy, people want to buy more. This kind of pressure is especially harmful, because often people are not aware it is affecting them.

When does use become misuse?

Whatever the reason for starting, alcohol and drugs can easily become misused. A person is misusing drugs or alcohol if she loses control over when she uses alcohol or drugs, over the amount she uses, or over the way she acts when using alcohol or drugs.

Here are some common signs that people are misusing drugs
or alcohol. They:

If using a drug is changing your life, it is time to stop or to use less. It is better to stop before the drug harms you, your family, or your friendships.

Why people misuse drugs and alcohol

Many people end up misusing drugs and alcohol in order to escape from problems in their lives. All types of people do this. But people whose parents misused alcohol or drugs are much more likely to try and solve their problems in the same way. This is because a ‘weakness’ to misuse drugs or alcohol may be passed from parents to children. And as children watch their parents use alcohol or drugs to escape problems, they learn this same behavior. 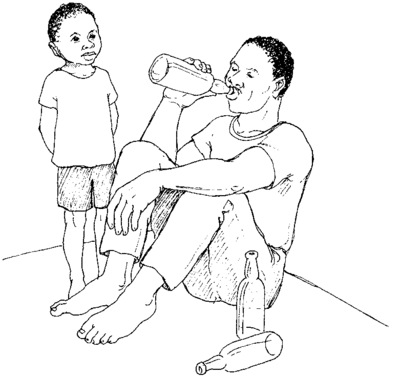 Alcohol and drug misuse is also common among people who do not feel any hope about changing the miserable conditions of their lives. People who are displaced from their homes or facing desperate problems—like losing their jobs or way of earning a living, losing family members, or being abandoned by a partner—are also more at risk for misusing drugs and alcohol. Women often begin to misuse drugs or alcohol because they do not feel that they have any control over—or power to change—their lives. They may feel dependent upon, or at the mercy of, their partner or male family members. And if women have low status in the community, it may be hard for them to value themselves. Unfortunately, drugs and alcohol usually make all these problems worse, and people feel even less able to improve their lives. Instead of looking for ways to improve their situations, most people who misuse drugs or alcohol spend their time, money, and health on trying to avoid and forget their problems.

Dependence and addiction
When a person misuses drugs or alcohol, both the mind and the body can begin to feel an overpowering need for the drug. When the mind feels this need, it is called dependence. When a person’s body feels such a strong need for the drug that she gets sick without it, it is called physical addiction. Alcohol and some drugs can cause addiction. Once a person becomes addicted, she will need more and more alcohol or drugs to feel their effects. (See information about overcoming the physical addiction caused by alcohol.)

← PREVIOUS | NEXT →
Retrieved from "http://en.hesperian.org/w/index.php?title=Where_Women_Have_No_Doctor:Use_and_Misuse_of_Alcohol_and_Drugs&oldid=92483"