HealthWiki > Where Women Have No Doctor > Chapter 4: Understanding our Bodies > Monthly Bleeding

About once each month during her reproductive years, a woman has a few days when a bloody fluid leaves her womb and passes through her vagina and out of her body. This is called ‘monthly bleeding’, the ‘monthly period’ or ‘menstruation’. It is a healthy process and is part of the way the body gets ready for pregnancy. 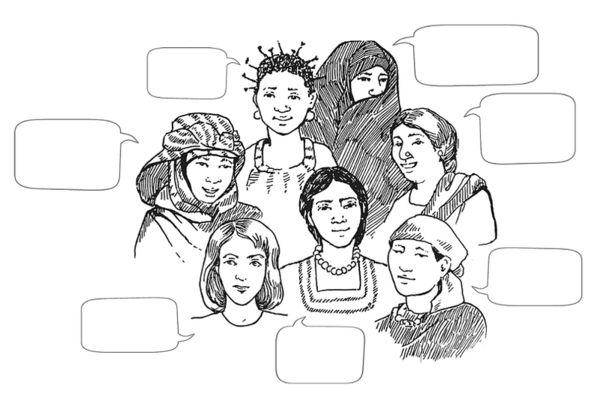 Around the world, women have many different names for their monthly bleeding.
I see the
moon.
My monthly
habit is here.
I have a
visitor from
Russia.
I have my
monthly
bleeding.
I have my
period.
María is
crying.
A friend is
visiting.

Most women think of their monthly bleeding as a normal part of their lives. But often they do not know why it happens or why it sometimes changes.

The monthly cycle is different for each woman. It begins on the first day of a woman’s monthly bleeding. Most women bleed every 28 days. But some bleed as often as every 20 days or as little as every 45 days.

The amount of the hormones estrogen and progesterone produced in the ovaries changes throughout the monthly cycle. During the first half of the cycle, the ovaries make mostly estrogen, which causes a thick lining of blood and tissue to grow in the womb. The body makes the lining so a baby would have a soft nest to grow in if the woman became pregnant that month.

About 14 days before the end of the cycle, when the soft lining is ready, an egg is released from one of the ovaries. This is called ovulation. The egg then travels down a tube into the womb. At this time a woman is fertile and she can become pregnant. If the woman has had sex recently, the man’s sperm may join with her egg. This is called fertilization and is the beginning of pregnancy.

A woman may find that the time between each monthly bleeding changes as she grows older, after she gives birth, or because of stress.

During the last 14 days of the cycle—until her next monthly bleeding starts—a woman also produces progesterone. Progesterone causes the lining of the womb to prepare for pregnancy.

Most months, the egg is not fertilized, so the lining inside the womb is not needed. The ovaries stop producing estrogen and progesterone, and the lining begins to break down. When the lining inside the womb leaves the body during the monthly bleeding, the egg comes out too. This is the start of a new monthly cycle. After the monthly bleeding, the ovaries start to make more estrogen again, and another lining begins to grow.

If you have problems with your monthly bleeding, try to talk with your mother, sisters or friends. You may find that they have them too and they may be able to help you.

Sometimes the ovary does not release an egg. When this happens, the body makes less progesterone, which can cause changes in how often and how much a woman bleeds. Girls whose monthly bleeding has just begun—or women who have recently stopped breastfeeding—may only bleed every few months, or have very little bleeding, or too much bleeding. Their cycles usually become more regular with time.

Older women who have not yet gone through menopause may have heavier bleeding or bleed more often than when they were younger. As they get closer to menopause, they may stop having monthly bleeding for a few months and then have it again.

During monthly bleeding the womb squeezes in order to push out the lining. The squeezing can cause pain in the lower belly or lower back, sometimes called cramps. The pain may begin before bleeding starts or just after it starts. 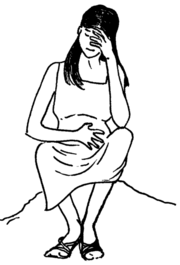 Some women and girls feel uncomfortable a few days before their monthly bleeding begins. They may have one or more of a group of signs that are known as pre-menstrual syndrome (PMS). Women who have PMS may notice:

Many women have at least one of these signs each month and some women may have all of them. A woman may have different signs from one month to the next. For many women, the days before their monthly bleeding starts are a time of unrest. But some women say they feel more creative and better able to get things done.

What helps with PMS is different for each woman. To find out what will help, a woman should try different things and notice what makes her feel better. First, try following the suggestions for pain with monthly bleeding. 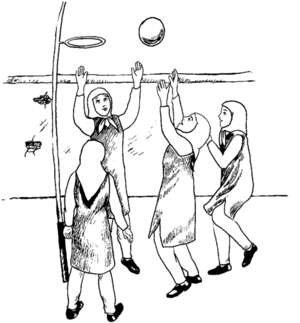 Exercise can sometimes help with the signs of PMS.

These ideas may also help:

← PREVIOUS | NEXT →
Retrieved from "http://en.hesperian.org/w/index.php?title=Where_Women_Have_No_Doctor:Monthly_Bleeding&oldid=92089"