HealthWiki > Where Women Have No Doctor > Chapter 14: Infertility (When You Are Not Able to Have a Baby) > Living with Infertility 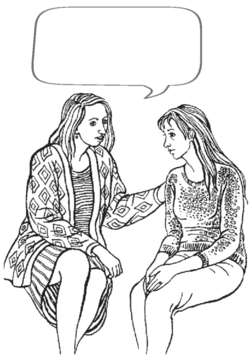 I understand how you feel. I also have been unable to have a child.

When this happens, it is important to know you are not alone. Try to talk with people who love and care about you. You may also be able to find other couples with the same problem and learn to help each other.

The stories below describe some ways that people have coped with infertility:

Lina was 25 years old and had been married 3 times. She was very unhappy because each of her husbands divorced her when she did not become pregnant. In the village, people spoke about her and blamed her, saying that she must have used some magic to avoid pregnancy before she was married, and that it must have been so strong it had made her infertile.

Her sisters all had children, and sometimes Lina cared for them. Her older sister had tuberculosis (TB) and she was very ill when she gave birth to twins. Lina asked if she might adopt one of the twins and her sister agreed. Lina went to the health center and asked the health worker to help her find a way to feed the baby. The health worker taught Lina how to feed the baby from a cup and arranged to have the baby breastfed during the day by a healthy woman in the village with another baby. At night Lina fed her baby from a cup, with breast milk that another sister gave her each evening. 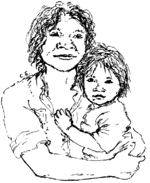 Lina’s friends and neighbors were not sure that her baby would be healthy. But when they saw the baby grow strong, they were pleased and proud of Lina. In fact, Lina came to be seen as an expert in raising adopted babies. When a village mother died in childbirth, her baby was given to Lina to care for.
The twins have grown up now, and people often say that the one Lina adopted is taller and stronger than the other. They credit this to Lina’s loving care.
— Bundoora, Australia

Building a life without children: Sara and Tito’s story

Sara and Tito tried for many years to have children, but they were not able to. At first they were sad, because in their community, couples were expected to have as many children together as they could. But then they decided to stop thinking that their lives were not complete without children and to plan a future for themselves.

They decided to start a business and to travel from town to town, market to market, selling pots and pans and other goods. With children, it would have been very difficult for them to travel in this way. 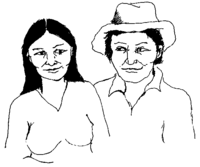 Now that Sara and Tito are older, people say they look alike in their faces and attitudes. They care for each other, share many laughs and many friends. They are not grandparents like their neighbors, but they have many interesting stories to tell. They are respected by everyone in the community.
— Lima, Peru

← PREVIOUS | NEXT →
Retrieved from "http://en.hesperian.org/w/index.php?title=Where_Women_Have_No_Doctor:Living_with_Infertility&oldid=92101"