In most villages and communities people use and understand many gestures or signs made with their hands. Most of these signs are ‘common sense’, or look something like the things they represent. Some children’s games use hand signs. For example:

When a family has a deaf child, they begin to use the local signs and also to invent new ones of their own. For example, at a village rehabilitation center in Mexico, a family arrived on muleback with their 6 year old deaf son. The boy got nervous and wanted to go home. So he pulled on his father’s shirt sleeve and made these sounds and signs:

The family had begun to figure out its own sign language, without having been taught it. The boy himself had made up the sign for ‘RIDING the MULE ’.

The sign language that families develop with their deaf children is usually not very complete. Communicating is often still difficult. However, people have joined together to create sign languages which are complete languages. There are hundreds of different sign languages, but there are 3 main types: 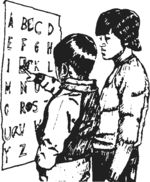 If possible, contact the Association of the Deaf in your country, and see if you can get a guidebook to sign language adapted to your local area or spoken language. If this is not possible, you can use the local signs and gestures, and invent more signs of your own.

On the next few pages we give ideas for making up signs, and examples for common words. Most are signs used in American Sign Language. You will want to change them to fit the gestures, customs, and language of your area. Here are some ideas:

See other signs with fingers as legs in "Examples of Signs".

HOW TO ASK QUESTIONS

The signs shown here are mostly used in the United States (American Sign Language). A few are from Nepal, Jamaica, and Mexico, because these seem easier to understand. We have chosen signs for things and actions that should be useful for early learning and group games with children. We include them mainly to give you ideas. Change and adapt them to better fit your area.

Note: A few signs shown here are based on letters of the alphabet (for example, ‘it’ uses the letter T, and ‘we’ the letter ‘W’). Change these signs if you speak a different language, or if you want to avoid signs based on letters.

NUMBERS (one of many systems)

← PREVIOUS | NEXT →
Retrieved from "http://en.hesperian.org/w/index.php?title=Disabled_Village_Children:Sign_Language&oldid=92921"