Covering the wires inside the electrical system of a building or inside equipment protects the equipment and the workers. Keeping the wires and equipment dry also prevents shocks because water on or near the wires can carry electricity to anything the water touches. 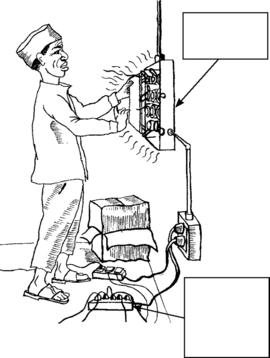 Electrical wiring can safely operate only a certain number of machines or lights. If too many machines are using one circuit, the wiring can become very hot and cause a fire. When a circuit box, machine, or wiring feels or smells hot, it is overloaded, and is a fire waiting to happen.

Liang grew up in a small farming village in China. When he was 15, he went to the city and got a job in a garment factory. He worked long hours every day, trying to save money. 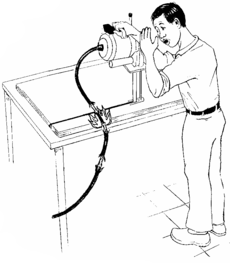 Frayed electrical wires can cause shocks and start a fire.

Liang became a cutter in the factory. As his power knife moved, its electrical cord would rub against the table edge. This wore through the covering on the cord, and he was shocked many times. The manager said it was his fault for touching the wires. One day, while he cut cloth for shirts, the cloth touched the exposed wires and caught on fire. A worker near the wall grabbed the fire extinguisher and ran to Liang’s table. They put out the fire before it spread to the piles of cloth nearby.

The manager yelled at Liang for letting the cloth catch on fire and for using so much of the fire extinguisher. But everyone knew that Liang and his co-worker had stopped the fire from spreading to the rest of the factory. The cutting room workers demanded the manager fix uncovered wires like the one that started the fire. Before the fire, the boss had said it was too expensive to repair Liang’s cutting knife and that he should just be more careful. But now he hired an electrician to fix all the wires and cords.

Encouraged by this success, Liang and his co-workers met to discuss other problems, like locked exit doors. They used the fire to make their factory safer. Liang hoped they could win more changes before any other accidents happened.

Extension cords are not sturdy enough to be used in place of permanent wiring. It is dangerous to run extension cords through walls, doors, or ceilings. When they are connected for a long time, extension cords can get hot and cause fires. Workers can also trip over extension cords, or a tangle of cords connected to a power strip, injuring themselves and damaging the cords.

Lock out wiring and equipment for repair

To prevent shocks and other injuries, workers should always tag out and lock out electrical systems and equipment before doing maintenance and repairs. This means more than just disconnecting the electricity from a machine (see Lock out machines for safe repair). 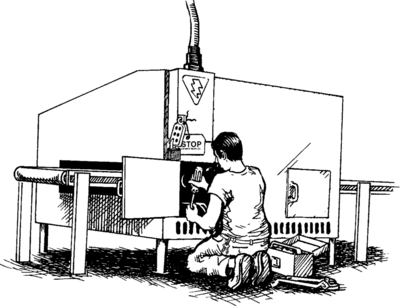 ← PREVIOUS | NEXT →
Retrieved from "http://en.hesperian.org/w/index.php?title=Workers%27_Guide_to_Health_and_Safety:Protect_workers_from_electrical_dangers&oldid=95454"