After the garment is sewn, it will be processed again to add certain qualities or colors. End-of-the-line workers correct mistakes and wash and spot-clean the garment. Then it will be dried, pressed, and pleated before the final counting, sorting, and packaging.

One of the final steps of making some jeans is to put them in a large washing machine filled with pumice stones. The stones rub against the cotton of the jeans to make it softer and lighter. Some jeans are then acid-washed. Workers sponge or spray potassium permanganate bleach, chlorine bleach, or other bleaches on the garment to make it look worn. Or they soak pumice stones in the bleaches and put them in the washing machine where the jeans are washed. Sometimes jeans are tied or twisted to create different patterns. (The job of tying or twisting garments is often done by homeworkers. See Chapter 20: Doing factory work at home.)

The bleaches used in acid-washing can burn your skin and irritate your eyes, nose, and throat. Potassium permanganate bleach can also cause other health problems, including decreased fertility for men and women, and liver and kidney problems.

If you work in an area that uses bleaches to wash jeans:

Another way to lighten and soften denim is for workers to use a high-pressure machine to spray the jeans with sand. Sandblasting is so dangerous to workers’ lungs it has been banned in many countries. Sometimes brands prefer jeans sanded by hand. But sanding by hand creates many of the same health dangers and can be worse when workstations do not have strong ventilation to remove the sand.

Unsafe sanding and sandblasting expose workers to sand dust, also called silica dust. When silica dust gets in the lungs, it cannot be breathed out. Silica dust causes an illness called silicosis. Silicosis makes breathing difficult and can cause auto-immune diseases, lung cancer, and death. There is no cure for silicosis and a person who continues to be exposed to silica dust will continue to get worse. People exposed to silica or who have silicosis are also more likely to get TB (tuberculosis). Smoking tobacco makes silicosis damage worse.

For sanding and sandblasting workstations to be safer, workers need:

Safer alternatives are now used in many factories. Levi’s and some other brands have stopped using sandblasting. 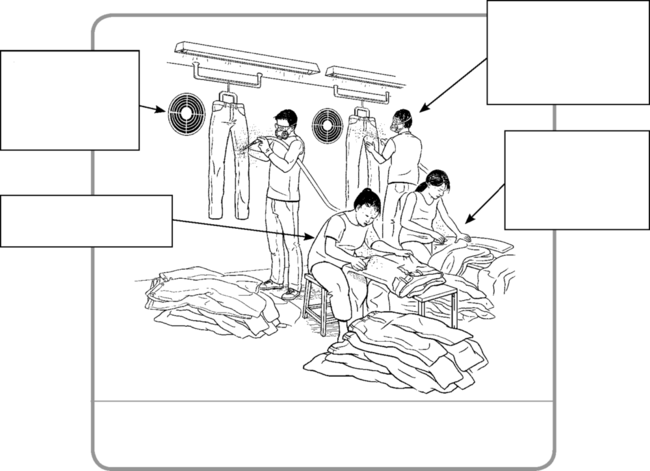 Extractors have to be very powerful and cleaned often to remove all the sand.
Workers nearby should be protected, too.
These respirators will not keep sand away from workers’ lungs. They need supplied air respirators.
Sanding by hand uses less sand than sandblasting, but workers are still exposed to sand.
Sand spreads easily and quickly. All workers who might be exposed to the sand need to be protected.

Workers should not die for fashion!

We came from other countries and got jobs sandblasting jeans in Turkey. We worked and lived in the workshop. We used machines to blast sand on the jeans to create a special look. The sandblasting was very strong.

Our boss gave us nothing to protect ourselves. We used bandanas or whatever cloth we could find to cover our mouths and noses. But our eyes and hands were not protected. After work we would go upstairs from the workshop and that’s where we would sleep.

Soon, many of us starting having breathing problems. And as time went on, we got bad coughs that did not go away. It became harder to breathe. Many of us started losing weight. Some people became so sick they went back home to their families. We never heard from them again.

A few of us went to the occupational clinic and were diagnosed with silicosis. We discovered we would never be able to work again, or walk, or run because our lungs were so damaged. But we were the lucky ones. Dozens of workers died from silicosis. And those were just the ones we knew about.

The workers disabled from silicosis were very angry. Why did the bosses do this to us? Jobs should not kill people! We began organizing with other workers in Turkey. Soon we connected with organizations around the world, such as the Clean Clothes Campaign. They helped us put pressure not only on the factory owners but on the brands whose products we made. The factory owners had to take responsibility for making workers sick. But nothing was going to change if we didn’t get the brands to stop demanding that factories sandblast jeans. We also needed to make sure no more people got that horrible disease. We organized rallies, conferences, and talks and, finally, the government of Turkey agreed to outlaw sandblasting in the country.

Then we turned our attention to the brands. With pressure from the people, labor unions, organizations, and even some governments, we got several brands to ban sandblasting! Some companies began using other methods, which are just as bad as sandblasting. But we were ready for them. The campaign and strong networks we built will continue fighting against sandblasting and any other process that harms workers. Workers should not die for fashion!

Sometimes workers screen print pictures or designs on garments, especially T-shirts. For many years, the inks used in printing, and the solvents used to clean up, were all petroleum-based and toxic for workers. Much of the industry now uses vegetable- or water-based inks and solvents, which are much safer for workers and the environment. 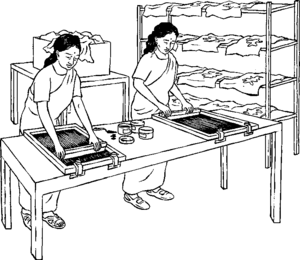 After the image is printed on the garment, it is put in an oven-type dryer. This machine gets very hot. To reduce risks:

Fire is a danger because of the chemicals used in screen printing.

They don’t let us sit. Only the people sewing get to sit. They say sitting slows down quality control. But we need chairs!

Workers inspect the garments and correct small mistakes by undoing and hand-sewing to fix the problem. They also cut and pull any remaining threads. They make sure the garment looks clean and neat.

If the garment is dirty, workers usually clean it with solvents. But many solvents used for cleaning are toxic (see the box below). Ask your employer to use less toxic solvents, wear gloves, and make sure you have good ventilation at your workspace.

These chemicals are less dangerous, but catch fire easily:

See Appendix B for more information. 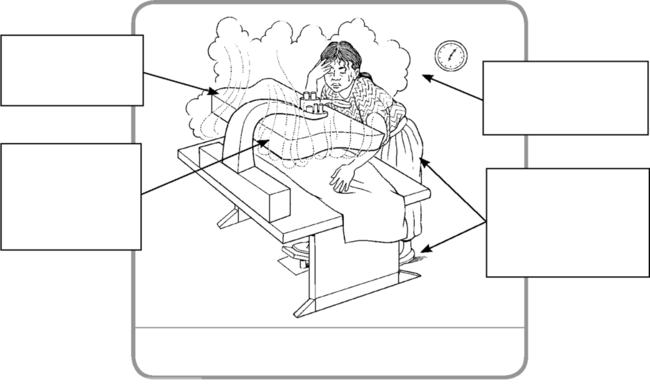 The hot machines and steam can burn workers.
Chemical fumes that come off the heated fabric harm your throat and lungs.
Working in high heat can exhaust and dehydrate workers.
Standing for hours, and pushing down on the press, can hurt your back and muscles.
Heated chemicals are dangerous.

← PREVIOUS | NEXT →
Retrieved from "http://en.hesperian.org/w/index.php?title=Workers%27_Guide_to_Health_and_Safety:Finishing_the_garments&oldid=91880"