HealthWiki > Where Women Have No Doctor > Chapter 29: Refugees and Displaced Women 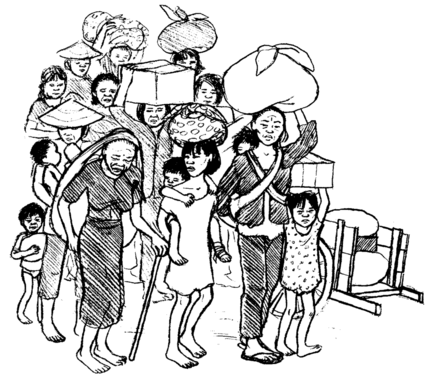 Out of every 10 refugees and displaced persons in the world, 8 are women and children.

Refugees are people who cross the border of their country into another country, because they fear for their survivial at home. Displaced people are people who are forced to leave their homes but remain in their own country. Many refugees and displaced people are victims of a group that has gained power and is prejudiced against the ethnic group, religion, nationality, or political views of others. If this group controls basic resources like food and water, people must leave their homes to survive.

Women and girls make up around half of all refugees and displaced people They need laws that give them economic and social rights, so they can get basic resources like food, shelter, clothing, and health care. As women, they need special protection from armed attacks, from sexual and physical abuse, and from being sold into sex slavery or human trafficking. Like all refugees and displaced people, women need to be protected from forced return to their homes.

This chapter will focus on some of the health problems that refugee and displaced women face. Most importantly, this chapter looks at the role these women can play in their new communities.

← PREVIOUS | NEXT →
Retrieved from "http://en.hesperian.org/w/index.php?title=Where_Women_Have_No_Doctor:Chapter_29:_Refugees_and_Displaced_Women&oldid=92833"