Concerns and Problems with Bleeding

Pain or cramps are common just before and during menstruation, and are not dangerous. Some women also feel tired, or get mood changes, headaches or diarrhea. All of these are due to the changes in hormones at the end of the cycle. 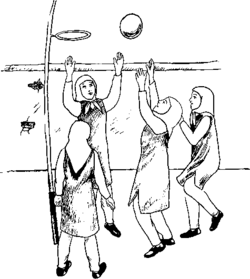 Pain in the lower belly when you are not bleeding is not normal. It can be caused by infection, ectopic pregnancy, cancer, or some other problem. See a health worker.

Regular bleeding is bleeding that starts about the same time each month and lasts about 5 days. But there is a lot of variation: some women start bleeding about once every 35 days, some every 24 days. Some women have several months with no bleeding. Some have a few months with a shorter cycle, and then a few months with a longer cycle. All of this is usually normal and just another way that each person’s body is different.

More than 2 pads full of blood in an hour is too much. Get help.

Some women have very heavy bleeding, or menstruation that lasts more than a week. This blood loss can lead to anemia which weakens the body and makes you tired. Women who have HIV and bleed too much are especially likely to get anemia. Eat plenty of iron-rich foods like meat, beans, eggs, and dark green vegetables. This helps replace the nutrients lost during menstruation. An iron supplement is also helpful.

Heavy menstrual bleeding or bleeding between menstrual periods can be a sign of small growths in the uterus (womb), either fibroids or polyps.

If heavy menstruation is bothering you, birth control injections or taking birth control pills daily may help. Talk with an experienced health worker.

The IUD, a birth control method, may cause heavier, more painful periods for some women.

Get help if there are signs of too much blood loss (feeling weak, dizziness, pale skin).

Bleeding is rare or stops 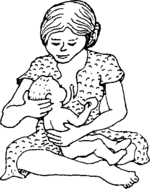 Infrequent periods or a stop in bleeding can be caused by:

Some women have light bleeding between menstrual periods. If this happens once or twice, it is not likely to be a problem. If it keeps happening, it can be a sign of an infection in the vagina, cervix, or womb. For more on these infections, see Genital Problems and Infections (in development).

Bleeding between menstrual periods or bleeding experienced by older women who have stopped menstruating (menopause) can also be a sign of cancer. See a health worker. Cancer in the cervix can be treated and cured when it is found early. 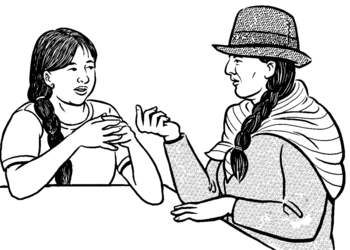 When something is different or painful about your period, don't be shy — talk to your health worker about it.

Bleeding after sex is not normal. It can be caused by a sexually transmitted infection (see Genital Problems and Infections (in development)) or cancer. It can also happen after rough or forced sex.

Bleeding during pregnancy is not normal. Early in pregnancy it can be a sign of losing the pregnancy (miscarriage). Later in pregnancy, it can be a very dangerous sign that the placenta is separating from the womb. This is an emergency and medical help is needed to prevent the woman from bleeding to death.

← PREVIOUS | NEXT →
Retrieved from "http://en.hesperian.org/w/index.php?title=New_Where_There_Is_No_Doctor:Concerns_and_Problems_with_Bleeding&oldid=91264"