Chapter 8: How to know if your child has HIV

HealthWiki > Helping Children Live with HIV > Chapter 8: How to know if your child has HIV

An HIV test can tell you if you or your child has HIV. The main reason to find out is to be able to seek the treatment and support you both need to stay well. The sooner you start, the better.

If the mother has HIV or becomes infected during pregnancy or breastfeeding, her baby can be born with HIV infection, though not all babies of women with HIV are infected. Almost no babies are infected when their mothers (and fathers) know they have HIV and take ART so their HIV is well controlled. See Chapter 7 for more about preventing HIV in babies and others. 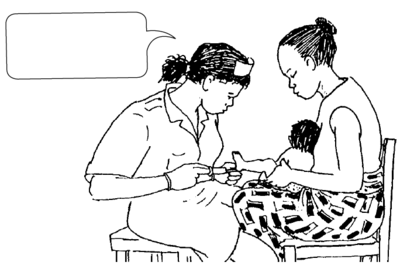 I’ll just take a bit of blood from her foot so we can test it.

If a baby is born with HIV, it is important to find out quickly. Babies with HIV are often harmed by it as soon as they are infected, unlike older people who may live years with HIV before they became ill. Even a baby who seems healthy at birth can develop poorly because of untreated HIV infection and quickly become weak and sickly. Most babies with HIV who do not get treatment die before they are 1 or 2 years old.

By getting tested, you can start the treatment and good care that keeps babies and children alive and growing well. With ART for babies and children now more available, many children born with HIV will grow up to be healthy adults who work, marry, and even have children of their own.

See Chapter 10 and Chapter 11 for information about ART and other ways to keep children healthy. 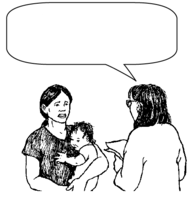 We can’t be sure he has HIV yet. We must do one more test.

The 2 basic tests for HIV infection are antibody tests and viral tests. Both test a small amount of blood.

Antibody tests are the most widely available HIV tests, give results in a few minutes, and are the least costly. They work by looking for the antibodies that the immune system makes to fight HIV infections. So the test will give an accurate result for HIV except in 2 cases:

A new antibody test known as an HIV self-test is now available in many parts of the world. It allows you to test saliva from the inside of the mouth with a swab and get results in a few minutes. It is usually accurate, but if the result is positive you should get a blood test to be sure. While the HIV self-test allows people who cannot or do not want to go — or will not take their child — to a clinic to be tested and know their status, it cannot provide what a clinic can: skilled counselors, access to ART medicines, support groups and social services.

Viral tests look for the HIV virus itself, so they can tell for sure if you or your child has HIV. These tests are most important for testing babies under 18 months old, and are recommended to confirm the result of an antibody test. In some places, they are the only HIV test given to babies. But viral tests (sometimes called PCR DNA tests or NAT tests) are generally less available, more costly, and usually take several days or weeks to be processed in a laboratory. Faster, less costly viral tests may be more available soon.

Viral tests may also be used when an adult’s antibody tests are not clear. Usually, to be sure of a positive test result, the antibody test will be repeated on the same blood. If one result is positive and the other negative, the person may be asked to return for another test, which might be a viral test.

← PREVIOUS | NEXT →
Retrieved from "http://en.hesperian.org/w/index.php?title=Helping_Children_Live_with_HIV:Chapter_8:_How_to_know_if_your_child_has_HIV&oldid=93285"