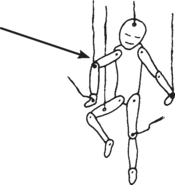 Arthrogryposis means ‘curved joints’. Children with this disability are born with stiff joints and weak muscles. The strange position of arms and/or legs may give a child the look of a wooden puppet.

In some children, both arms and legs may be severely affected. In others, only the legs or feet, or hands or arms may be affected.

A child born with clubbed feet and with one or both arms stiff with hands turned out, may have arthrogryposis. 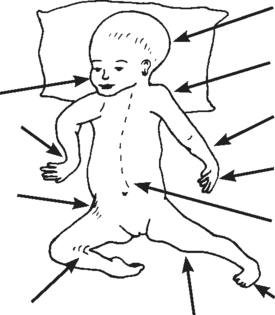 TYPICAL BABY WITH ARTHROGRYPOSIS
sometimes the face is long and the jaw large
wrist often bent up or out stiffly
hips often bent
upward or outward
stiffly; may be
dislocated
contractures with ‘webbing’ of skin behind joints (at knees, hips, elbows, or shoulders)
mind completely normal
shoulders sometimes turned in
often arms are stiff
at elbows and weak
hands and fingers often very weak
spine often curved but trunk strength usually normal
club foot common
knees bent or straight, in a stiff position

The cause of arthrogryposis is not known. It may be a virus infection of the mother, during pregnancy. Arthrogryposis is a rare condition in most of the world, but for unknown reasons, in parts of Central and South America it occurs more frequently. (In PROJIMO, in Mexico, 1 of every 100 disabled children seen has arthrogryposis.)

Rehabilitation of the child with arthrogryposis aims at helping the child do as much for herself as possible.

Some children with arthrogryposis are able to walk, especially if contractures are corrected. Correction of club feet and hip and knee contractures should begin gradually, and without forcing, soon after birth, with casting, positioning, and/or range-of-motion exercises.

Often, however, contractures of arthrogryposis can only be corrected by surgery. The possible benefits—and losses—which surgery may bring should be carefully evaluated. For example, a stiff elbow in a bent (contracted) position may be much better for eating than an elbow that has been straightened, and will not bend.

Most children with arthrogryposis are very intelligent. If given a chance, many can learn to do a lot of things for themselves, even with severe disability. Often they try hard and are eager to learn. It is very important that these children be encouraged and helped to do as much as they can for themselves, and that they go to school. The following story may help give you an idea of the possibilities of a child with arthrogryposis.

Gabriel is 7 years old. He lives with his family in Mazatlán, Mexico. He was born with arthrogryposis. Some of his joints are stiff and straight, others are stiff and bent. He lacks most of the muscles in his arms, legs, and hands. He cannot sit alone or lift a hand to his mouth.

Gabriel’s parents love him dearly and care for him tenderly. However, when he was born, doctors told them that nothing could be done for him. So his parents grew used to doing everything for him. As he grew older, they carried him in their arms, changed his diapers when he dirtied them, and gave him food in his mouth. They treated him like a baby—though he no longer was one.

When his mother learned of PROJIMO, she took Gabriel there, hoping that with surgery or special medicine, he might improve. The village rehabilitation workers at PROJIMO investigated all possibilities. They even took him to a famous hospital for disabled children. But the specialists said they could do nothing for Gabriel.

Fortunately, therapists who were visiting PROJIMO as instructors explained to the team that in fact there was a lot that could be done, not to help Gabriel walk, but to help him do more for himself—within his possibilities. The team began to work with the family, to help Gabriel become more independent.

Now, with the help of the village rehabilitation workers and his family, Gabriel is able to meet some of his basic needs for himself. He feels less like a baby and more like a young man. He has stopped using diapers; he asks when he needs to go to the toilet. He has learned to use his mouth like a hand, to hold and do things.

He has learned to feed himself. He swings his arm onto the table using his neck muscles, and hooks his hand over a spoon. Using the edge of the table and the rim of the dish to push against, he see-saws the spoon to his mouth. To drink he uses a straw with a bend in it. 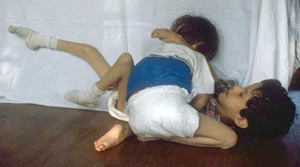 Gabriel wrestling with another disabled child.

Gabriel’s family has joined Los Pargos, an organized group of families of disabled children. He attends school in a speciallyadapted wheelchair that he can move himself. He is learning to read, write, paint pictures, and to play with other children.

There is much more that Gabriel and his family will be able to achieve, now that they all see how much he can do for himself. Gabriel is happy and eager to learn more.

← PREVIOUS | NEXT →
Retrieved from "http://en.hesperian.org/w/index.php?title=Disabled_Village_Children:Arthrogryposis_(Multiple_Contractures_From_Birth)&oldid=93065"