When people burn wood, dung, coal, charcoal, gas, and crop wastes indoors for cooking or heating without good ventilation, smoke fills the house. This smoke contains harmful gases (fumes) and tiny particulates (soot) that cause breathing problems and other illnesses. Headaches, dizziness, and fatigue are often followed by serious illnesses such as asthma, pneumonia, bronchitis, or lung cancer. Indoor air pollution from smoking fires also increases the risk of getting TB.

To reduce indoor air pollution, you can:

If you cook with gas and often suffer from dizziness and confusion, this may be a sign of poor ventilation or a gas leak. 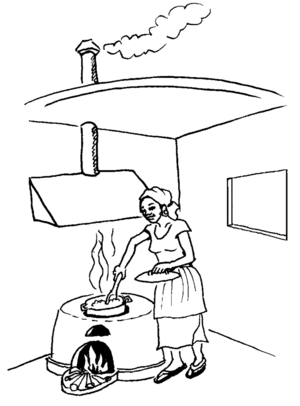 Ndito, a mother of 3 children, once began every morning with a terrible coughing fit. When she built a fire in the kitchen to heat water and prepare food, the house filled with smoke, causing Ndito to wheeze. Each breath was painful and labored. The smoke in Ndito’s kitchen gave her asthma.

Because of her health problems, Ndito and her husband Refa agreed to join the Kenya Smoke and Health Project. Refa learned to measure the air pollution in their house, and found that the amount of smoke was very unhealthy. Refa and Ndito decided to make changes to reduce the smoke pollution.

Project workers helped Ndito build a hood over her stove with a chimney to remove smoke from the house. Also, Refa built new, larger windows to improve ventilation. With less smoke in the house, the family spends more time together. The windows also make it easier for Ndito to watch over their livestock, and they let in more light, making it easier to do beadwork.

Before these changes, Refa stayed away from the kitchen. Now he wakes up before dawn to start the fire and puts on a pot of water for tea. Ndito is relieved from waking up early and doing all the chores by herself. The new smoke hood and chimney have reduced the amount of soot, so Ndito has less to clean. Her coughing fits are less common now. Refa and Ndito had to pay for the smoke hood, but the changes they made improved Ndito’s health and will protect the whole family from illness. Better health improved their livelihood, so the money they spent on the smoke hood is an investment in their future.

People often close a room tightly to keep warm or use less fuel. But heating without ventilation can be dangerous. In a poorly ventilated space, CO can cause serious illness, or even death. 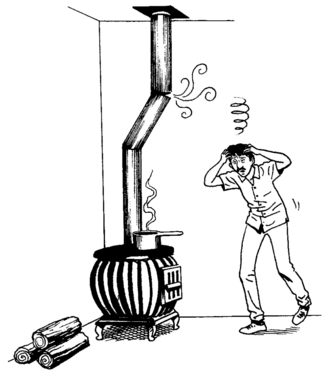 CO poisoning seems at first like flu, but without fever. Signs include headache, fatigue, shortness of breath, nausea, and dizziness.

The best way to prevent CO poisoning is to make sure your home has good ventilation. Check chimneys and flues for cracks, blocks, rust, and loose connections. Never burn charcoal, gas, wood, or other fuel inside a home, vehicle, or tent with poor ventilation. Do not use gas appliances such as stove tops, ovens, or clothes dryers to heat your home. Avoid using gasoline-powered tools and engines indoors. If you must use them, make sure there is good ventilation and place the engine so exhaust fumes will go outdoors. 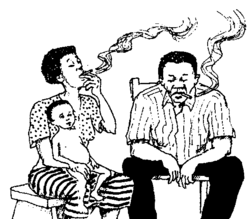 Second-hand smoke is the mixture of smoke that comes from cigarettes, pipes, and cigars, plus the smoke breathed out by the smoker. Second-hand smoke makes smoking dangerous for everyone who lives with a smoker, especially children. It causes the same health problems as does smoking.

To stop or help someone stop smoking

People who smoke become addicted to a drug in tobacco called nicotine. Without a cigarette, they may feel sick or nervous. As every smoker knows, it is difficult to stop smoking because nicotine is a very addictive drug. 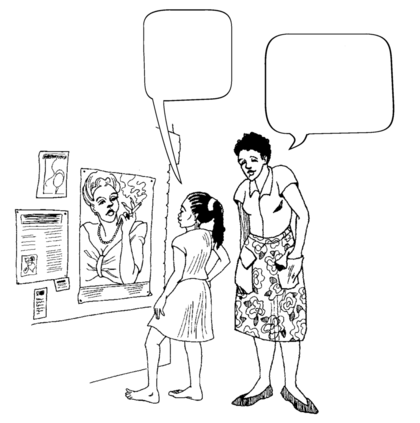 She looks so cool when she smokes!
But smoking cigarettes makes you sick. What is so cool about that?

Telling people “DO NOT SMOKE,” is rarely successful in helping smokers to stop. Some ways to help break the addiction and stop smoking include:

Tuberculosis (TB) is a disease that most often affects the lungs. It passes easily from person to person because when someone with TB coughs, the germs get into the air and live for many hours, letting other people breathe in the germs. TB spreads quickly in crowded homes and neighborhoods, in factories, work camps, prisons, refugee camps, and other places where people live or work closely and there is little ventilation.

Who gets sick from TB germs?

Many people have TB germs in their bodies, but only 1 out of 10 of them will get sick with TB. People are more likely to get sick if they are already weak from illnesses like asthma, malaria, or HIV, or if they are very young, very old, or malnourished. Smoking tobacco and breathing polluted air increase the risk of TB.

Tuberculosis is curable if it is treated early and completely. A person may have all or some of these signs when they first get sick:

Young children may have frequent fevers, steady weight loss, swellings in the neck or belly, or a lighter skin color.

If you think you may have TB, cover your mouth or cough into your shirt when you cough around other people, and wash your hands often. Go to a clinic right away. If the health worker finds you have TB, you will need to begin taking medicines. To cure TB, people take 4 different medicines every day for 2 months, then, if they are getting better, 2 or 3 medicines for another 4 months. If someone in the home has TB:

TB is less of a problem when homes and workplaces are well-ventilated. But as long as people in the community have TB germs, it will be a threat. Reducing poverty and training people to recognize and treat TB are more likely to stop the spread of TB than any other solution. To learn more about the signs of TB and ways to prevent and treat it, see a health worker or a general health care book such as Where There Is No Doctor.

← PREVIOUS | NEXT →
Retrieved from "http://en.hesperian.org/w/index.php?title=A_Community_Guide_to_Environmental_Health:Indoor_Air_Pollution&oldid=12349"