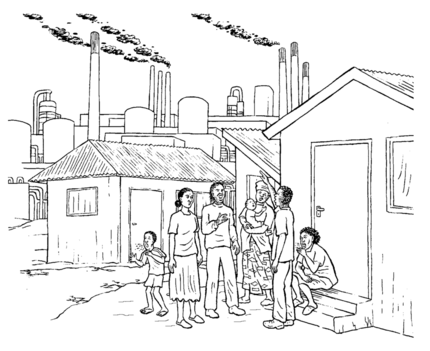 With the growth of industry and industrial farming over the past century, toxic chemicals have become a part of our daily lives. Most of these chemicals came into use with little understanding of the harm they cause to people and the environment.

We may be aware of these chemicals because we work with them, or because we can see and smell the pollution they cause around us. Factories, oil refineries, mines, and vehicles produce smoke and fumes that make people cough and choke. Waterways near industrial areas and large farms are often full of ugly, smelly waste. Petroleum production, chemical spills, and dumping sites contaminate water, soil, and air, often in ways that we can see and smell.

Other times, pollution cannot be seen or smelled. Some chemicals travel far from where they are used. They move through the air and water, in the foods we eat, and in the bodies of people, animals, and fish. Many chemicals used in ordinary products such as plastic bottles or motor vehicles, are so much a part of everyday life we do not even think about the ways they are dangerous.

Love Canal is a neighborhood in Niagara Falls, New York, USA. Love Canal was named after William Love, the man who began digging a canal to connect two rivers. The canal was never completed. Instead, a chemical company used the unfinished canal as a waste pit for 21,000 tons of toxic chemicals. Once the canal was full, the company covered it with soil and then sold the land to the city for one dollar, with the condition that the company was not responsible for any health problems that might arise.

Over the years, homes and a school were built next to the buried waste. Before long, people living in Love Canal began to have serious health problems. Lois Gibbs, one of the residents, knew something was wrong. “We knew there were too many miscarriages, too many birth defects, too many nervous system problems, and too much asthma and other breathing problems among us,” she said.

Mrs. Gibbs organized the community to demand a government investigation into these problems. When the government found toxic chemicals leaking into the ground around people’s homes, the community demanded money from the government to relocate all the residents. The residents were moved, but not before many of them suffered serious health problems. Today, an empty neighborhood and many people suffering lifelong illnesses are reminders of the dangers of toxic waste at Love Canal.

Lois Gibbs went on to fight against the harm caused by toxic pollution in other places. Her work helped pressure the US government to pass laws requiring companies to clean up their toxic wastes. Most importantly, Mrs. Gibbs helped people believe they have the power to stand up to the chemical industry, demand a healthy environment, and win! In her book Dying from Dioxin, she wrote:

We can blame the victim and get everybody to stop eating milk, fish and meat, and stop breastfeeding their babies. Or we can explore how people became powerless as the corporations became powerful. We have to discuss why our government protects the right to pollute more than it protects our health.

Email us at [email protected] with a story and the first 50 responders will receive a free copy of Community Guide to Environmental Health in either English or Spanish.
← PREVIOUS | NEXT →
Retrieved from "http://en.hesperian.org/w/index.php?title=A_Community_Guide_to_Environmental_Health:Chapter_16:_Harm_from_Toxic_Chemicals&oldid=97690"