The best way to prevent harm from a toxic chemical is to stop using it and replace it with something safe. But if you cannot immediately remove a toxic chemical from your workplace, you can try to use less of it (as well as protect yourself from it). Workers may be able to convince their bosses that using less and fewer chemicals is better for everyone, is less wasteful, more efficient, and less costly. For example: 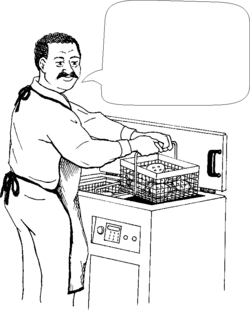 We used to use solvents. Now we use soap and water in this ultrasonic degreasing machine.

Your factory should use the mildest, safest chemical products needed to get the job done. For example:

We now use a safer chemical

Our factory in Mexico makes plastic drinking straws shaped to spell people’s names. They are kind of a silly product, but there was nothing silly about what they did to our health. 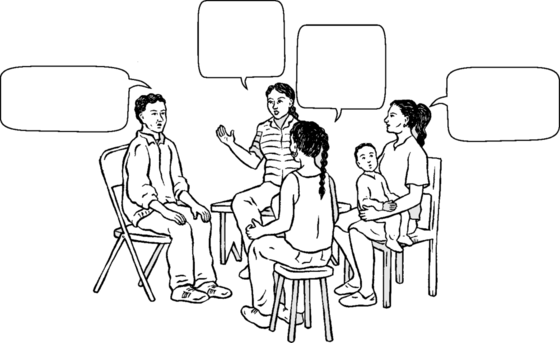 I cannot taste anything anymore.
I get headaches and a dry throat.
Every day it feels like my throat is on fire.
This migraine is the last straw!

We all had the same health problems. We suspected these problems were caused by the chemical we used to fuse the straws together. The containers we used did not have labels, so we asked the storeroom workers for a label from one of the large containers. 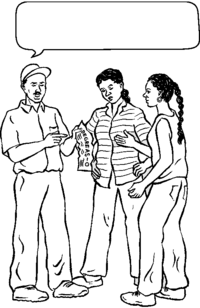 The chemical is called methylene chloride.

I talked to my neighbor Miriam, who always knows what to do. She brought us and the label to the office of the Comité Fronterizo de Obreras (CFO), an organization that works with workers in our area. The CFO had a whole box of chemical information sheets. We found the sheet for methylene chloride. It was very hard to understand. The CFO organizer explained what all the scientific terms meant and we learned methylene chloride does more than just give us sore throats and headaches. It can harm the liver and cause cancer! 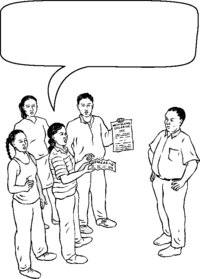 This chemical is very dangerous! It makes us sick, and it can kill us!

When the boss refused to do anything about it, we took the information about methylene chloride to the local office of the national environmental protection agency, PROFEPA. We asked them to inspect the factory.

We had to pressure them several times. The inspectors finally came, but they told the boss ahead of time. Just before the inspection, the boss replaced the methylene chloride with another chemical. 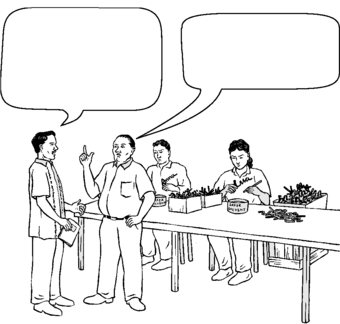 I don’t see any methylene chloride, but you must install local exhaust vents at each workstation.
We didn’t put vents in because we do not want to pollute the air outside.

The boss claimed he didn’t want to pollute the air outside, but he did not care if we breathed dangerous chemicals all day inside the factory!

PROFEPA never required the boss to install the local exhaust fans. But after the inspection, the boss kept buying the less dangerous solvent, even though it was more expensive.

Ban the most dangerous chemicals

Some chemicals are too dangerous to use in factories or anywhere else. Thanks to years of protest by workers, OSH professionals, doctors, and health advocates, many countries prohibit the use of:

Manufacturers have developed safer products and processes that do not depend on these most dangerous chemicals. And workers, environmentalists, and responsible businesses are lobbying to ban:

Banning very harmful chemicals not only protects production workers, it also protects recycling workers and consumers, and keeps pollution out of our air and water.

Companies help each other use safer chemicals

NGOs and businesses formed BizNGO to promote responsibility about the chemicals used in products. They developed these steps:

Companies making shoes, electronics, and other products have found these steps useful. BizNGO provides conscientious people working in industry a way to support changes to benefit families, friends, and neighbors — because we all share the same planet.

← PREVIOUS | NEXT →
Retrieved from "http://en.hesperian.org/w/index.php?title=Workers%27_Guide_to_Health_and_Safety:Reduce_and_remove_toxic_chemicals&oldid=95449"