Illnesses caused by pollution are not the same for each person or each community. Children often have more health problems than adults, because their bodies are small and still developing. Some problems affect women more than men. Inside or outside the factory, at work or at home, health problems caused by chemicals depend on the type of chemical, the way people are exposed to it, and how often or for how long. To learn more, see Chapter 8: Chemical dangers and Appendix B: Common chemicals and materials.

Harm caused by pollution can also depend on the environment around the factory, such as the direction of winds, the kind of soil, the number of trees, the location of water sources, or the depth of groundwater. Some pollution can travel through water and air, and can also harm fish, birds, animals, plants, and people in communities far away from the factory.

Factories contaminate the air by blowing chemical vapors and smoke out through vents and smokestacks, and by burning waste in open dumps or incinerators. Exhaust from generators, diesel trucks, and buses also fill the air with dangerous gases. 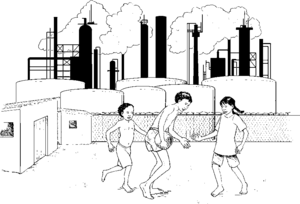 Air pollution can cause skin, heart, and breathing problems, and eye irritations and infections. Dangerous chemical gases in the air can also cause cancer and other serious illnesses, problems with fertility and pregnancy, miscarriages, and harm to babies before they are born. Some chemicals harm children’s ability to think and learn.

Air pollution that harms people can also harm other living things. For example, soot from the smoke of motor exhaust can cover the leaves of a plant and change the way the plant grows, or cause the plant to produce less fruit, or even die.

When new factories were built near Nogales, a Mexican city on the USA border, people on both sides of the border welcomed the jobs they brought. The factories had no smokestacks, so nobody worried about pollution. But after a while, many people started getting sick with cancer and other serious illnesses. A group of sick people got together to support each other and named their group LIFE — Living Is For Everyone. They decided to find out why so many people were sick. 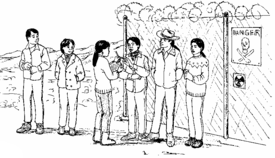 LIFE members surveyed their neighborhoods and made a map showing where sick people lived. They found that people living near certain wells were sick much more than people in other parts of the community. They were also concerned about a dump where factories burned waste.

LIFE took pictures of the dump and contacted the media. 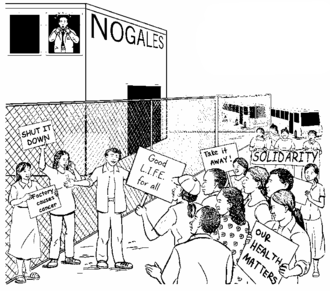 They wanted the dump closed, and they wanted help proving that factory pollution was making them sick. But others in the community were worried that all this attention was going to scare the factory owners into leaving Nogales. They held many meetings where everybody got to discuss their fears and frustrations. After many weeks, the community decided to back LIFE. LIFE’s campaign convinced the government to study the water, ground, and air in Nogales. The studies found high levels of chemicals that cause cancer.

After an educational campaign on both sides of the border about pollution and health, Mexican officials finally closed the dump that burned factory waste. Although Nogales still has more than its share of sickness, people are now better organized to stop other sources of pollution and are more aware about the links between health and environment

Factories often dump dirty water, used chemicals and oils, sewage, and cafeteria waste directly into the ground or into a community water source, such as a river, lake, or stream. Waste dumped into the ground can poison the groundwater that feeds other water sources, such as wells and ponds. Electronics companies sometimes store very dangerous chemicals in underground tanks. In many countries, including the United States, these containers have leaked, contaminating the soil and groundwater with toxic chemicals. 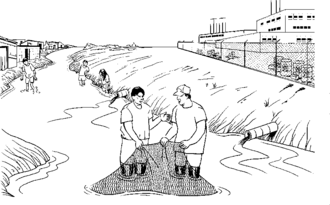 Using polluted water for drinking, cooking, washing, and bathing can cause many health problems, including stomach infections and diarrhea, skin infections and rashes, eye infections, reproductive problems, cancer, and other serious illnesses.

Water pollution can harm fish and other plants and animals that live in or near the water. Eating fish and plants from contaminated water can also cause health problems. Polluted groundwater or irrigation water can ruin soil for growing crops and it can poison food grown in the soil.

Factories also produce solid waste, such as spoiled parts, metal filings, scraps, empty chemical containers, used cardboard boxes, wood pallets, plastic, wire, paper, and other trash. Some companies transport waste to a local dump or landfill where it may be buried or burned. Factories may recycle some types of waste, such as paper and cardboard, but too often waste is just dumped in piles outside the factory and in the community.

On the night of December 2, 1984, 40 tons of deadly chemical vapors spread through Bhopal, India, a city of about 1 million people. The chemical came from a leak inside a pesticide factory owned by Union Carbide, a large corporation from the United States. The factory had an alarm system to warn if there was a leak, but the owners of the factory had disconnected it. Within an hour, the deadly gas covered the entire city. Many people died in their sleep that night, and over 8,000 people died in the days that followed.

The harm from that night 30 years ago still continues. More than 20,000 people have died and more than 150,000 people live with serious health problems that include lung damage, loss of vision, and cancers. The poisoning affects children born to survivors of the disaster. Many children in Bhopal have been born with misshapen bodies and are unable to grow, learn, and talk like healthy children. Even people who moved to Bhopal afterwards are affected because they drink poisoned water and eat food grown in the area.

Union Carbide and the company that now owns it, Dow Chemical, have refused to take responsibility for the disaster. But the people of Bhopal have organized to demand justice and win compensation for survivors and their families. They are fighting for the Indian government to supply their communities with clean water, and to clean up and remove poisonous materials and contaminated soil from the factory site.

The Bhopal disaster shows what can happen when we trust a company to keep us safe from the extremely dangerous chemicals used in their factories. Because companies routinely ignore basic safety precautions to increase profits, they and their hired experts cannot be allowed to evaluate the benefits and risks by themselves. Disasters will be prevented only when workers and neighbors have the information they need and the power to participate in decisions about their community’s safety.

A large chemical leak or spill can suddenly harm the whole community, as did the disaster in Bhopal. The leak or spill can come from machinery inside the factory, from a break or explosion in containers and pipes that hold dangerous liquids or gases, or from trucks or trains carrying chemicals or waste.

Chemical explosions or fires can spread poisonous smoke through the air. The water used to fight a fire can carry chemicals into lakes or streams, or into the ground where it can contaminate wells and other water sources.

Electronics contain hundreds of dangerous substances that can harm workers’ health when they are being produced. When these products are no longer useful and are thrown away or recycled, they often end up poisoning even more people.

Workers, and sometimes entire families, disassemble electronics waste. People smash, burn, and often work with their bare hands to separate the pieces. This releases dangerous and toxic chemicals into the air, soil and water. The workers, their families, and their communities are directly exposed to cadmium, lead, and hundreds of other chemicals known to cause serious health problems, cancers, and death.

← PREVIOUS | NEXT →
Retrieved from "http://en.hesperian.org/w/index.php?title=Workers%27_Guide_to_Health_and_Safety:Health_problems_caused_by_pollution&oldid=95498"