Be prepared in case of fire

HealthWiki > Workers' Guide to Health and Safety > Chapter 11: Fire > Be prepared in case of fire

Many lives can be saved if factories have:

Practicing how to get out of the factory or dormitory quickly and safely, and where to meet outside, helps keep people from panicking if there is a real fire. Organize a "fire drill" in your factory. 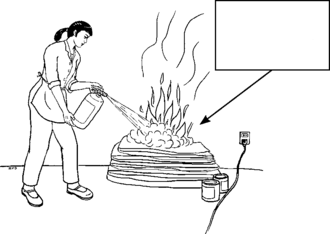 A fire extinguisher can put out a small fire quickly.
Point the spray at the base of the fire.

When you remove or block one of the things a fire needs, a fire cannot burn. It is important to know about and practice ways of stopping a fire, but also practice how you can get out of the factory quickly if a fire starts. 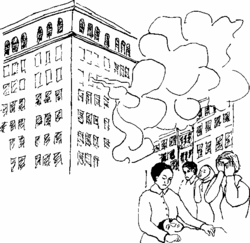 On March 25, 1911 about 500 immigrant women were working in the Triangle Shirtwaist factory in New York City, USA, when a fire started. They tried to escape, but the doors were locked. The fire escape was so weak, it collapsed. Other workers tried to escape the flames by jumping out windows 9 floors above the street. In just 25 minutes, 146 women workers died.

The Triangle fire made people realize how unsafe factories were, and workers’ organizations in the USA pressured the government to pass and enforce fire safety laws.


On May 10, 1993 a fire broke out in a storage area of the Kader toy factory in Bangkok, Thailand. The building’s fire alarm did not sound and workers were told to keep working so they could finish an order. The fire spread quickly. Workers had been locked in to force them to work overtime, and there were no fire exits or fire extinguishers. 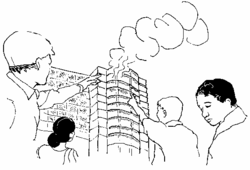 188 workers were killed and hundreds more injured. The survivors and the victims’ families used their anger and sadness to fight for safety and helped form ANROEV, the Asian Network for the Rights of Occupational and Environmental Victims.


On November 24, 2012 more than 100 people were killed when fire raged through the Tazreen factory in Dhaka, Bangladesh, which was making clothing behind locked doors for Walmart and other brands. Only a few months earlier, a Walmart representative had told the Bangladesh Garment Manufacturers and Exporters Association that it cost too much to put fire safety systems in garment factories.


Workers will continue to die in preventable factory fires until local factories and the big international brands that purchase from them place as much value on workers’ lives as they do on low prices and high profits.

Who is to blame for factory fires?

"The buyers for the brands are to blame. They say we have to improve working conditions so they can tell their customers they are good companies. But when we ask them to pay just a few cents — cents! — more per piece, which would go to workers’ welfare, they refuse! They say the economy is bad, but we see that they are making a lot of money."

"The owners are to blame. The factories should be closed until they are safe. But the owners are very influential. They pay off the government."

← PREVIOUS | NEXT →
Retrieved from "http://en.hesperian.org/w/index.php?title=Workers%27_Guide_to_Health_and_Safety:Be_prepared_in_case_of_fire&oldid=95561"