What it means to be a woman or a man in a particular community includes beliefs about men’s and women’s sexuality— that is, about sexual behavior, and how people feel about their own bodies.

A few harmful beliefs about women’s sexuality that are common in many communities are described below. These beliefs and other harmful effects of gender roles—the lack of opportunity and choice for women, and the lack of value they feel—can prevent women from having control over their sexual lives. This puts them at great risk for sexual health problems.

Mothers and fathers begin to teach their children about their bodies as soon as they are born. Parents do not do this directly. But a baby learns it by the way the parents hold her, and the tone of their voices.

As a little girl grows, she becomes curious about her body. She wants to know what the different parts are called and why her genitals are different from a boy’s. But she is often scolded for being curious, and is told that ‘nice girls’ do not ask such things. If she touches her genitals, she is taught that it is dirty or shameful—and that she should keep her sexual parts hidden.

Her parents’ reactions teach a little girl that her body is shameful. As a result, she will find it difficult to ask questions about changes in her body as she enters puberty, and about her monthly bleeding, or about sex. She may be too embarrassed to talk to a health worker, because she does not know what parts of her body are called or what questions to ask. When she starts having sex, she is less likely to understand how her body feels sexual pleasure, or to know how to protect herself from unwanted pregnancy or sexually transmitted infections.

Harmful belief: A woman cannot be happy without a man

The idea that a woman can only be happy if she is with a man is often used as an excuse to control women’s lives, and has even been used to justify rape. It implies that a woman’s ability to have sex is the most important thing about her and her only way to be fulfilled. This belief is frustrating for many women, and can keep them from developing in other ways.

In many communities, a woman is treated like the property of her father or husband. As a child, she belongs to her father, and he can arrange to have her marry or do whatever work he chooses. Her future husband wants his property to be ‘pure’ and unspoiled by other men, so he expects her to be a virgin. After marriage, he feels he has the right to use her body for his pleasure whenever he wants. He may have sex with other women, but she is to be his alone.

These beliefs can cause great harm. A girl learns that other people make the important decisions about her life—it does not matter what she wants or what skills she could contribute to the community. Because virginity is valued so highly, she may marry at a young age. Or she may try to remain ‘virgin’ by using unsafe sexual practices. For example, she may have sex in the anus (so that her her hymen will not be torn), which puts her at great risk for HIV infection. When she starts having sex, she may not be able to use family planning methods with her partner or protect herself from sexually transmitted infections.

But men do not own women’s bodies! A woman’s body is hers, and she should be able to decide how, when, and with whom to share it.

A woman is often taught that it is part of her duty as a wife to meet her husband’s sexual demands. But if she is a ‘good’ woman, she will endure sex, not want it. 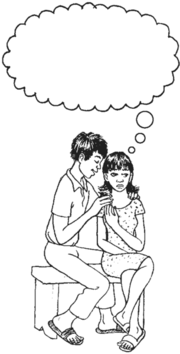 How far should I let him go? I like him, but I'm afraid of what he'll think.

Again, these beliefs harm a woman’s sexual health. First, a woman who believes she should not think about sex will be unprepared to have sex safely. She is less likely to learn about family planning or about how to get and use condoms. Even if she has the information, it will be hard for her to discuss these things with her partner beforehand. If she can discuss sex, her partner may think she is sexually experienced, and therefore ‘bad’.

Once she is in a sexual relationship, she is likely to let her partner control the kind of relationship they have. This includes when and how they have sex, whether they try to prevent pregnancy or sexually transmitted infections, and whether he has sex with other women. This puts her at great risk for getting infected.

← PREVIOUS | NEXT →
Retrieved from "http://en.hesperian.org/w/index.php?title=Where_Women_Have_No_Doctor:How_Gender_Roles_Affect_Sexual_Health&oldid=92805"