HealthWiki > Where Women Have No Doctor > Chapter 30: Female Genital Cutting 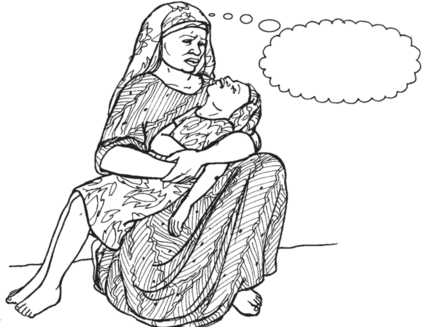 There must be a way we can change this.

This chapter was written by women who are living and working in communities where female genital cutting is practiced.

Sometimes this practice is called excision.

In some communities, a girl must be cut before she can become a wife and mother and, in some cases, to own property.

Throughout history, customs harmful to women’s health have been practiced in order to make women seem more attractive or likely to marry. For example, in some European communities, a woman was thought to be more beautiful if she had a very small waist. So starting when they were girls, women were forced to wear a band of stiff cloth called a ‘corset’ tied so tightly around the waist and hips it sometimes broke their rib bones, and kept them from breathing or eating properly. It was very difficult for them to do anything but sit still or walk slowly.

And in parts of China, a woman had higher status if she had very tiny feet. So the bones of some girls’ feet were broken and their feet tightly wrapped in cloth so that when they became women, their feet were deformed and they were unable to do more than walk slowly.

These customs have been stopped, but in some parts of the world, other customs continue. Female genital cutting is one of them. It is practiced in many communities of Africa, in some communities in the Middle East, and in a small number of communities in Southeast Asia. It involves cutting part of a girl’s or woman’s genitals. Female genital cutting is practiced for a variety of reasons, most of them based on culture and tradition. It is often a cause for great celebration in the community.

Female genital cutting does not stop a woman’s need for love and companionship or affect her moral behavior. But it does interfere with her normal body functions, and can harm her relationship with her husband or partner. Female genital cutting also causes many health problems, and some of these problems can lead to lasting harm or death.

← PREVIOUS | NEXT →
Retrieved from "http://en.hesperian.org/w/index.php?title=Where_Women_Have_No_Doctor:Chapter_30:_Female_Genital_Cutting&oldid=92503"