Children Who Have Difficulty Understanding

In many communities, a child who is mentally slow, has an especially difficult time. Other children may make fun of him for not being as quick as they are, or for not being able to understand, follow, or remember things as easily as they can. They may not realize that this child has the same need for friendship, play, and respect as they do.

This activity is designed to help children gain more appreciation of both the needs and possibilities of the child who is mentally slow. They will explore possible ways to help the child to feel a part of their group, and to learn new things at his or her own speed.

Talk with the children

You may want to start the activity by asking the children questions such as:

Begin with games and activities that help the children discover what it may feel like to have difficulty understanding, and to be unfairly blamed for that difficulty. Then the children can look for ways to help a person learn that are easier, friendlier, and more effective.

A GAME TO START WITH: ‘ENGLEFLIP’

(‘Engleflip’ is a nonsense word, but let us pretend that it means ‘Stand up’.)

After the activity, discuss...

You can also use role plays or skits to explore the difficulties of a child who does not understand, and how to help him understand.

For example: Ask 5 children to put on the role play. 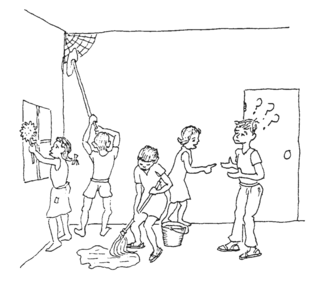 They can pretend to be cleaning house. But before they start, ask one child to go out of the room. Tell the other 4 that after they have cleaned for awhile, they should turn to the 5th child and say, “Blah, blah, blah, blah.” Tell the 4 children that this means, “Go get some water!’ But the 5th child will not know this.

Tell the 4 children to keep saying the words, and then to add other ways to help the 5th child understand.

The 5th child comes back and they begin.

Afterwards, discuss with the whole class:

The story might begin by one child waking up one morning and not understanding anything anyone says.

Each child in the class writes or tells the rest of the story in his and her own way. Invite them to draw pictures with their stories. 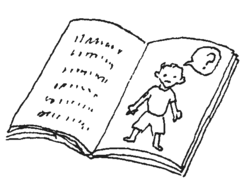 Ask the children to include in their stories ideas for helping the child understand.

This activity could be done in a language or writing class. After they have written the stories, the children can read them to classes of younger children.

It is important that the children also realize the importance of remembering things and the difficulties of a child who has an especially hard time remembering. Then they can try to find ways to help that child remember things more easily. 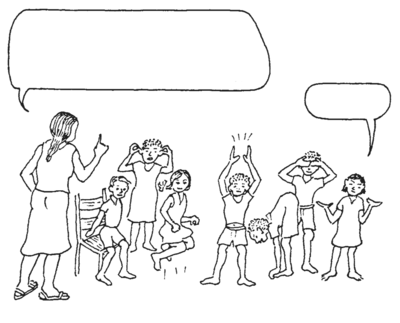 Stand up, hold your ears, jump three times, clap your hands, touch your toes, squat, cover your eys, pat your stomach, turn around, and blow your nose.
What was next?

If the children cannot remember all the things, repeat the list louder, but just as fast.

Now do it differently. Say each thing slowly, and wait until they do one thing before you go on to the next. 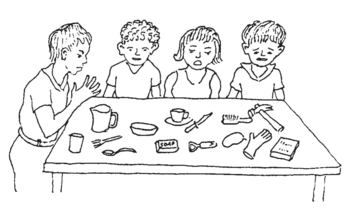 Place 14 different things on a table where the children can see them. Let them look at them while you count to 30. Then cover them with a cloth and take 7 things away. Remove the cloth. Have the children write down the things that are missing.

Repeat the game using 6 different things and removing 3. Which is easier?

After the memory games:

STORY AND DISCUSSION: “I FORGOT”

Another day the boy goes to buy bananas and comes back with matches. Why? How could we help him remember? Here are some possibilities: 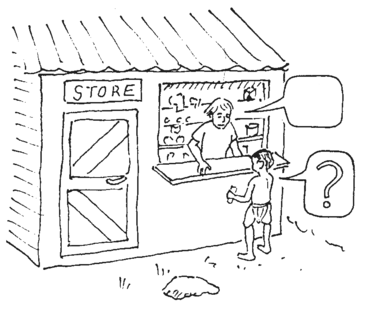 Can I help you?

The children can act out a role play something like this:

A mother sends her child shopping. She tells him a long list of things he must buy. He goes around the class 3 times and meets a lot of people who ask him a lot of questions like: “What time is it?” “Where are you going?” “Which way is the market?”

How much does the child remember when he gets to the store?

Talk with the class about what happened. How might it be made easier for the child to remember what he must buy? (Let us suppose the child cannot read.)

PUTTING INTO PRACTICE WHAT WE LEARN

Do the children know any child in the village or neighborhood who has difficulty understanding or remembering?

Is there something they can do that might help the child to:

If there are some children (or grown-ups) in town who make fun of the disabled child or treat him badly, is there anything the children can do? What? What precautions should they take? The story on the next page can give children ideas for helping a child who is mentally slow to learn basic skills. For more ideas, see Chapters 32 to 41.

ZAKI AND NASIR
A Story From Pakistan

This is the story of 2 brothers, Zaki age 9, and Nasir age 7. Their father was a shopkeeper in Peshawar, and their mother was a teacher. They had a big brother and a big sister who were both students, living away from home. Zaki was doing well at school but Nasir had never even started school. There was something different about Nasir from other children. Nasir was mentally disabled. His brain did not work properly. He could only say a few odd words. He could not dress himself, and he made a mess at mealtimes.

Zaki felt ashamed to have such a brother. Neighborhood children made fun of Nasir. They called him nasty names and pushed him about. Nasir would get angry and try to hit them, and then fall flat on his face. Some of the grownups would shake their heads and say Nasir had an evil spirit inside him.

The worst of it for Zaki was that he had to take care of Nasir a lot of the time, when there was nobody else at home. It meant that he could not go out to play with his friends from school. And there was nothing to enjoy in looking after Nasir. He could not talk. He did not know how to play any games.

Zaki felt very sorry for himself, and used to hate Nasir for the times he had to stay in the house looking after him. It was so unfair! He had never done anything wrong, so why should he have to have a brother like that, who stopped him from going out and playing with his friends?


One day a visitor came by their house, looking for Zaki’s father. It was his cousin, Dr. Daud. Zaki’s parents were out. Only Zaki and Nasir were in the house. Dr. Daud noticed that Zaki had been crying. “What’s the matter?” he asked. Zaki told Dr. Daud all about his brother Nasir and how his own life was spoiled by having to look after him.

Dr. Daud listened carefully. Then he said, “Yes, you’ve certainly got a problem. But tell me, what are you doing about it?” “What can I do?” cried Zaki. “Nasif’s just as bad now as he was 2 years ago, and he’ll be twice as stupid in another 2 years time.” Dr. Daud looked thoughtful. “Well, he might be,” he replied. “But that depends on how clever you are.”

“What do you mean?” asked Zaki. “I’m getting good marks at school, while he can’t even start” “Well,” said Dr. Daud, “if you’re clever enough for 2 then you could really help Nasir to change for the better. Then you’d both be happier and you’d get more free time to go out and play.” “How can I do that?” asked Zaki. Dr. Daud said, “First, I’ll have a talk with your father and mother.”

That evening Dr. Daud called again and had a long talk with Zaki’s parents. “I can’t give you any medicine for Nasir,” he said, “because there isn’t any that will cure him of mental disability. Not even the best surgeons can do anything. But you have the answer right here in your own home. If you have enough time and patience you can teach Nasir to do a lot more than he can do now.” But Zaki’s father said, “That’s just the problem! We don’t have enough time at home. I can’t have Nasir in the shop. He pulls everything off the shelves. And his mother is teaching at school and then has to get our food, and then gives private lessons. We can’t stop working, or we’ll never eat and pay the rent.”

“But Zaki has the time,” said Dr. Daud. “He could do a lot to teach Nasir. Why not try it for a month. I’ll show you where to start.”

So Zaki became Nasir’s teacher. But he also learned a lot of things himself. He started teaching Nasir to dress himself. Of course, Zaki knew how to put on a shirt. You just pick it up, and put it on! But he soon realized that there was more to it, when teaching Nasir. First you had to find which was the back and which was the front of the shirt. Then you had to find the main hole and get the head through it. Then one arm went into the right sleeve. Then the other arm into the other sleeve. Next you pull the whole thing down over yourself.

Then there was teaching Nasir to feed himself. You would think it was obvious, how to eat! But Nasir had to find out step by step how to pick up a piece of chapati, get some curry on it, put it into his mouth and remember to chew and swallow. It took dozens of repetitions and lots of encouragement and rewards before Nasir learned each step. Zaki began to realize what Dr. Daud had meant. He needed to be clever enough for 2 in order to puzzle out how to teach Nasir. But when Nasir succeeded in some small step, they were both so delighted that it made all the effort worthwhile. 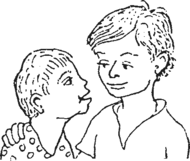 A few months later Dr. Daud was passing Zaki’s house. Zaki came rushing out, “Quick, Doctor, you must come in!” Dr. Daud hurried in, thinking he would find someone at the point of death. But all he saw was Nasir, grinning broadly in his chair. “What is it? What’s the matter?” demanded the doctor. Zaki was so excited he could hardly speak. “He said a whole sentence, Doctor. Nasir did. He’s never said more than 2 words together before now. He just said, ‘Zaki give sweets to Nasir’. I’ve been trying for months to get him talking. He did it! He did it!”

Doctor Daud smiled. “I think you like your brother better than you used to,” he said.

← PREVIOUS | NEXT →
Retrieved from "http://en.hesperian.org/w/index.php?title=Disabled_Village_Children:Children_Who_Have_Difficulty_Understanding&oldid=90902"