Because this is a book on ‘rehabilitation’, it is mostly about children who are already disabled. However, preventing disabilities is also very important. For this reason, in most chapters on specific disabilities, we include suggestions for preventing them.

Notice that we place the discussion of prevention at the end of each chapter, not at the beginning. This is because people are usually not concerned about disability until someone they love becomes disabled. Then their first concern is to help that person. After we have helped a family to do something for their disabled child, we can interest them in ways to prevent disability in other members of the family and community.

We mention this because when health professionals design community programs, often they try to put prevention first—and find that people do not show much interest. However, when a group of parents comes together to help their disabled children, after their immediate needs are being met, they may work hard for disability prevention.

For a community program to be successful, start with what the people feel is important, and work from there.

To prevent disabilities, we must understand the causes. In most parts of the world, many causes of disability relate to poverty. For example:

To prevent the disabilities that result from poverty, big changes are needed in our social order. There needs to be fairer distribution of land, resources, information, and power. Such changes will happen only when the poor find the courage to organize, to work together, and to demand their rights. Disabled persons and their families can become leaders in this process. Only through a more just society can we hope for a long-term, far-reaching answer to the prevention of disabilities caused by poverty.

Although the most complete prevention of disabilities related to poverty depends on social change, this will take time. However, more immediate actions at family, community, and national levels can help prevent some disabilities. For example,

Why, since a good vaccine exists, is there still so much polio in so many countries?

EFFECTIVE VACCINATION DEPENDS ON MANY FACTORS:

ECONOMIC (Cost of vaccine and of getting it to the children.) Leaders in poorer countries must decide that stopping polio is worth the expense.

MANAGEMENT Knowledge of needs, planning, transportation, and distribution of the vaccine.

KEEPING POLIO VACCINE FROZEN (In many countries, ⅓ of vaccines are spoiled by the time they reach the children.)

EDUCATION People must understand the value of vaccination and want to cooperate. Health workers must know how important it is to keep polio vaccine frozen.

POLITICAL Vaccination programs are most successful where the government fairly represents the people and has their full participation in countrywide vaccination campaigns.

ETHICAL (Honesty and goodwill) Doctors, health workers, and citizens must try to see that vaccine reaches all children. (In some countries, some doctors throw vaccines away and fill out false reports, and health inspectors do not care enough to try to stop what is happening.) 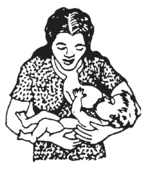 In places where vaccination is not available or not fully effective, families and communities can help to lower the chance of paralysis from polio by breast feeding their children as long as possible.

TO PROTECT AGAINST PESTICIDE POISONING 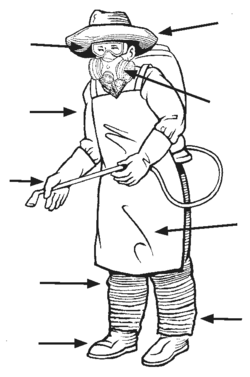 goggles
a long- sleeved shirt
thick rubber gloves
(not leather, it absorbs pesticides)
long pants (women too!)
rubber shoes or boots, with socks
a hat with a brim
mouth and nose protection: a respirator or face mask is best
a thick canvas, plastic, or rubber apron
keep pant legs outside boots

CAUTION! Make sure that children, and women who are pregnant or breast feeding, stay away from all pesticides.

The high cost, overuse, and misuse of medicines in general adds greatly to the amount of poverty and disability in the world today. Better education of both doctors and people, and more effective international laws are needed to bring about more sensible supply and use of medicines.

Note: Although too much fluoride is harmful, some is necessary for healthy bones and teeth. In some areas fluoride needs to be removed from drinking water; in other areas it needs to be added.

The 4 biggest causes of ‘crippling’ in India, affecting over 2 million people, are reported to be polio, iodine deficiency, fluorosis, and lathyrism. Given the political will, all could be completely prevented!

← PREVIOUS | NEXT →
Retrieved from "http://en.hesperian.org/w/index.php?title=Disabled_Village_Children:Chapter_3:_Prevention_of_Disabilities&oldid=93027"