Social and Political Causes of Hunger

Hunger may be caused by many things, such as poor soil, changes in climate, lack of access to water, and so on. But in most communities, hunger is also caused by poverty. When there is little or no income for farmers, or little money to buy food, people go hungry. To understand the root causes of poverty and hunger in one community, it helps to look at the problems with food security that affect every community.

Corporate control of all parts of food security forces farmers out of business and off their land. When corporations use land to grow food to sell outside the region, people living and working in those communities must eat food brought in from elsewhere, if they can afford to buy it.

Corporations profit from this food “insecurity” as communities, and whole countries, become dependent on the global market for food. When the market fails to meet people’s food needs, people go hungry and corporations profit further by selling food to governments to be distributed as food aid.

Until people have control of their food security, hunger will be the biggest product of the corporations that control the production and distribution of food. 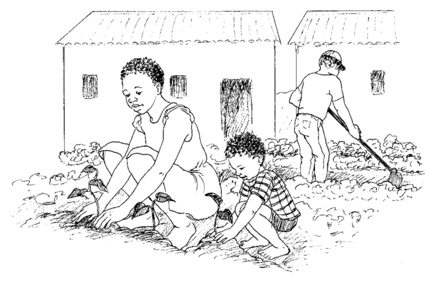 In Zimbabwe, farmers once planted many kinds of grains. During the Green Revolution of the 1960s, the government and international agencies brought a new kind of maize for farmers to plant. Farmers liked the hybrid maize because it had large grains, grew quickly, and was easy to sell. The government bought much of their crop, and then resold it to other countries and to cities in Zimbabwe where food was scarce. Over time, maize became the most common food to eat in Zimbabwe, and most farmers grew it in large quantities.

Then came years of drought. Very little rain fell over the fields of Zimbabwe and other countries in southern Africa. The maize grew poorly, and there was little else to eat. Many families had stored grains for times of hunger, but much of their stores of maize had rotted. This was a surprise, because the millet and sorghum they used to grow had lasted many seasons in storage.

When the rains finally started, they came in huge storms that uprooted crops and washed away precious soil from the dry fields. Hunger grew so severe in Zimbabwe that the government was forced to ask for food aid from the United Nations. Large shipments of maize came in by airplane and were handed out to hungry people across the country. But food aid and the new hybrid seeds could not solve the long term problem of hunger and food security.

The farmers realized they could not bring more rain, but they could change how they farmed to make better use of the rain. Farmers began to collect and plant seeds from small grain crops such as sorghum and millet that had always grown well in Zimbabwe. Farmers planted every kind of seed they could get. If drought destroyed one crop, others would surely survive. Some farmers left their crop stubble to rot in the field after harvest, protecting their soil from washing away during the hard rains. The next season, their soil was still soft and good for planting. Some farmers planted lab lab beans after the grain harvest so something was always growing. They could feed these beans to livestock, and the bean plants also helped to hold and enrich the soil.

It still rains less in Zimbabwe than it once did. But some farmers there no longer rely on non-native seeds or international food aid, and have become better able to prevent hunger, by growing crops that can survive the drought.

Ever since the “Green Revolution” of the 1960s, corporations and international agencies have claimed they can “feed the world” with “improved seeds,” chemical fertilizers, and pesticides. While they have succeeded in gaining control of farm land, seed supplies, marketing and distribution systems, and so on, they have failed to stop world hunger, and have often made hunger worse.

Crops need water to grow. As large farms use more and more water, less and less is available for smallholder farmers. When water is polluted or privately owned, the right to water is threatened. There are many ways to manage soils and water to preserve water resources (see Chapter 9: Protecting Watersheds and Chapter 15: Sustainable Farming), but these methods must be protected and promoted by governments and international agencies supporting people’s right to water.

When most of the land is owned by a few people or corporations, this causes many food problems. Many smallholder farmers are forced to leave their land and migrate to the cities, or work on plantations or in factories. Because they no longer have land to grow their own food, or money to buy healthy food, they become victims of hunger and malnutrition.

Usually larger farms and corporations will plant just one crop, employ fewer people, use more machinery, more chemical fertilizers, pesticides, and herbicides, and sell produce far from where it is grown, often sending it to other countries. This creates less variety of food, poorer nutrition, less income for farm workers, more environmental damage, and less food available locally. This also harms local cultures because people can no longer maintain their traditions of growing food and taking care of the land.

Because farming depends on the weather and on market prices, farmers sometimes need to borrow money until harvest time or until the market improves. Banks often refuse to lend money to smallholder farmers while lending money to larger, more powerful farms. This causes smallholder farmers and their families and communities to go hungry. In many cases, it also forces them to give up their land.

When people are forced off their land, they may also lose their knowledge of how to produce food. If young people leave for the city before learning to farm, they will never be able to teach their own children how to farm and the family’s loss of land will be permanent.

As diseases like HIV and AIDS, TB, and malaria kill millions of people worldwide, hunger and malnutrition increase. Families and communities are losing whole generations of people, usually the people who would be most active growing food. Food production goes down as farmers die, and their knowledge of how to grow food dies with them. Preventing and treating these diseases not only prevents the hunger and malnutrition that go with them, but is important for the entire community’s food security.

In many places, people have lost traditional knowledge of how to produce food. And because of rapidly changing conditions, such as overcrowded communities, less fertile land, and changing weather, old methods often no longer work. When people do not know how to produce food, hunger and a lack of food security is the result. One solution to this problem is to maintain, pass on, and improve knowledge through farmer field schools, farmer to farmer education programs, and agricultural extension services (see Other Nutrition, Food, and Farming Resources).

← PREVIOUS | NEXT →
Retrieved from "http://en.hesperian.org/w/index.php?title=A_Community_Guide_to_Environmental_Health:Social_and_Political_Causes_of_Hunger&oldid=94765"