Every Part of Oil Production is Harmful

HealthWiki > A Community Guide to Environmental Health > Chapter 22: Oil, Illness, and Human Rights > Every Part of Oil Production is Harmful

Understanding the damage caused to both health and the environment during each stage of oil production can help you respond.

When companies first start looking for oil, forests are cut down and homes are destroyed. Roads are built, and streams and rivers are blocked up. The search for for oil often involves a series of explosions set off to help oil companies know what is underground. This is called seismic testing. Seismic testing damages homes, wildlife, and the land. 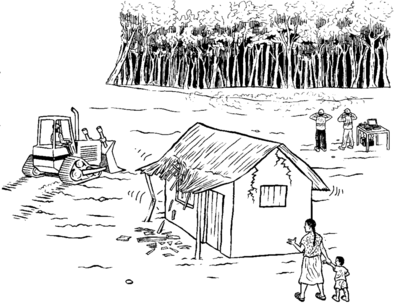 Before companies start the search for oil, community groups can visit government officials to try to stop the invasion of their lands, learn from the experience of NGOs and oil- affected communities, and educate everyone about the threat to community health. The oil company must file an Environmental Impact Assessment (EIA). If the EIA shows that the project will be destructive, the community can call for it to stop. The oil company must include in the EIA a plan for disposing of waste, protecting ground and surface water, and for alerting and evacuating nearby communities in case of accidents. 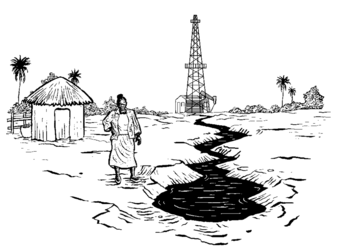 Oil wells are drilled to bring oil out of the ground. Oil drilling can cause fires, explosions, and other accidents that endanger workers and the community. When oil spills it pollutes groundwater and waterways, harms plants and animals, and damages resources for hunting, fishing, and farming.

Communities can use cameras, video, radio announcements, written reports, and even children’s drawings to document the harm from drilling. This documentation can be used as evidence when a community makes a demand to stop oil drilling and environmental destruction, to enforce the standards of the Environmental Impact Assessment, or to take legal action against the oil company.

Oil comes out of the ground mixed with gas, heavy metals, and toxic water. The oil must be separated from these other materials.

The dumping of the toxic water is often the largest cause of pollution. Laws about drilling in wealthy countries require the toxic water to be put back into the ground rather than dumped on the surface. This practice should be followed everywhere. 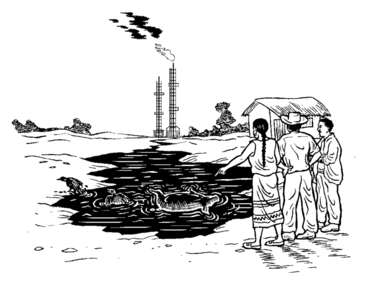 The other wastes are separated and dumped into containment ponds. Oil companies often do nothing more than dig a hole and dump in crude oil, drilling wastes, toxic water, and other wastes. These ponds often leak into the groundwater or overflow, contaminating groundwater and land.

Containment ponds should be lined with concrete. The ponds must be monitored for leaks and spills, and cleaned up before the oil operation ends.

The gases found with oil are often separated by burning them off. Gas flares expose workers, communities, and wildlife to pollution that causes cancer, skin diseases, asthma, bronchitis, and other health problems. The flares pollute the clouds, causing a “black rain” that poisons water sources.

Oil is often spilled during transport through pipelines, trucks, and ships. Oil can also leak from storage tanks. These spills may cause damage that lasts for years to soil, groundwater, animals, and people. Oil companies should warn communities when a spill happens, contain the spill, and clean it up right away. (To reduce harm from oil spills and to learn about oil spill clean-up, see Oil Spills.)

Environmental Impact Assessments for oil operations should include plans for pipeline building and use. You can build regional support by organizing communities along the pipeline to oppose unsafe oil company practices. 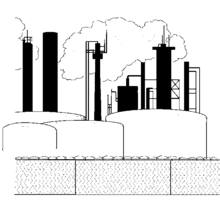 Refineries are factories where oil is made into products such as gasoline, diesel and heating fuels, asphalt, lubricating oils, and plastics. Refineries release toxic waste into water, soil, and air. Pollution from refineries leads to asthma, bronchitis, cancer, reproductive problems, and abnormal development of the brain and nervous system in children. This pollution also adds to global warming. (For more information about how communities can prevent and reduce harm from refineries, see Air Pollution and “Making refineries safer.”) 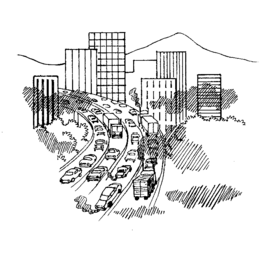 Burning oil and gas in factories and in automobiles creates different kinds of air pollution. One gas created is carbon dioxide, which traps heat in the air. This is one of the major causes of global warming, causing disasters like floods, storms, droughts, and rising seawater. It also affects crops, animals, and insects, allowing diseases like malaria to spread to new areas. At the gasoline station and in crowded cities, people are exposed to toxic fumes that can cause cancer and many other illnesses.

← PREVIOUS | NEXT →
Retrieved from "http://en.hesperian.org/w/index.php?title=A_Community_Guide_to_Environmental_Health:Every_Part_of_Oil_Production_is_Harmful&oldid=12384"