Cancer of the cervix

HealthWiki > A Book for Midwives > Chapter 20: The Pelvic Exam: how to examine a woman's vagina and womb > Cancer of the cervix

A Book for Midwives

Cancer of the cervix can be a deadly disease, but if it is found and treated early, it can usually be cured. Treatment to stop cancer is simple in the early stages. A trained health worker can freeze and destroy the abnormal cells. If it is further along a doctor or nurse can remove or destroy the diseased parts of the cervix in a clinic or medical center. After treatment, the woman will usually get better. Hundreds of thousands of women die every year from this cancer, because they did not get treatment.

Why do so many women die if the disease is preventable and easily treated?

Cryotherapy is a treatment that freezes any abnormal cells on a woman’s cervix so they do not develop into cancer. Cryotherapy uses a tool called a cryoprobe with carbon dioxide or nitrous oxide gas to freeze the surface of the cervix. Freezing destroys the abnormal cells.

Cryotherapy is used after a woman has a positive vinegar test or a positive Pap test.

Cryotherapy is very safe and has helped save many thousands of women’s lives. It is not painful, though some women say they feel a mild cramping like menstrual cramps, and others say they feel cold in their vagina. Cryotherapy will not affect a woman’s ability to enjoy sex or to have children, although a woman should not have vaginal sex or put anything inside her vagina for 4 weeks after cryotherapy treatment.

A woman should NOT get cryotherapy if she: 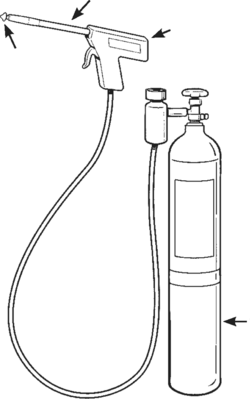 Heavy bleeding can make it difficult to see the white patches on the cervix from the vinegar test. She should wait until her bleeding has lessened or ended to have cryotherapy.

The cryoprobe is connected to a tank of coolant gas. The barrel of the cryoprobe is inserted into the vagina and the tip is held against the cervix. The gas cools the cryotip which freezes the area, and destroys the abnormal cells. This is done twice, waiting 5 minutes between the 2 freezing treatments

How to do cryotherapy

After cryotherapy a woman should avoid having sex or putting anything inside her vagina for 4 weeks. (Use pads or clean cloths, not tampons, for monthly bleeding or any vaginal discharge.) This is to prevent infection. If she cannot abstain from sex, advise her to use a condom.

She may have mild cramping like a menstrual period. She may have a watery discharge from her vagina for up to one month after. Reassure her that these are normal signs and not dangerous.

The woman should have another vinegar test for abnormal cells in 1 year to make sure the cryotherapy worked. If the vinegar test still shows white patches on her cervix, cryotherapy treatment can be done again.

WARNING! Complications from cryotherapy are very rare, but if a woman has any of these signs after cryotherapy, get medical help:

Note: Thermal ablation, another method for destroying abnormal cells, uses heat to kill the pre-cancer. But as with cryotherapy, if patches of abnormal cells are large or go inside the opening of the cervix, it will not work. The woman should go to a medical center for a different type of treatment.

← PREVIOUS | NEXT →
Retrieved from "http://en.hesperian.org/w/index.php?title=A_Book_for_Midwives:Cancer_of_the_cervix&oldid=96051"