Changing laws about abortion can take years. When abortion is illegal or very restricted, and many powerful groups are against legalizing it, change can seem impossible. But laws do change and, in fact, women can get safe, legal abortions now in places where it was completely illegal not very long ago.

Many people want to stop the harm caused by unsafe abortions. The way they organize to do this usually depends on what seems possible to change in their communities. Some people start by helping women get post-abortion care. Others learn about ways to help women have safe abortions. And many people work to make sure women and men know how to prevent unintended pregnancies.

Women have set up hotlines in some countries — including Pakistan, Indonesia, Ecuador, and Peru — to give information over the telephone to women who want to know how to safely use medicines for abortion.

In 2007, a law was passed in Mexico City making it the only place in Mexico where a woman could get a safe and legal abortion up to 12 weeks of pregnancy. This was an important step in the right direction. In other parts of Mexico many women were dying or being sentenced to long jail terms because of receiving illegal abortions. But poor women in Mexico City could still not afford the cost of safe abortion, and women in the rest of the country could only take advantage of the law by traveling to the capital and paying a doctor’s fee. 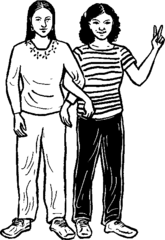 Because of this injustice, in 2009, two young women started the MARIA Abortion Fund for Social Justice to help make safe abortion available to all women. The services MARIA offers include:

Since it started, the fund has supported over 1,500 women through a network of volunteers all over Mexico. Aside from making abortion services more accessible to women, the MARIA fund is trying to make abortion a more visible and widely supported issue. And the MARIA fund has been successful. Some of the funding for the program comes from religious organizations that understand that anti-abortion laws are fatal for women.

The best way to protect both women who have abortions and health workers who support them is to build a network of people who share the same commitment.

People who organize to help women have safe abortions often face a choice between following the law and doing what they believe is right. In most countries, there are situations where abortion is legal and situations where it is not. It is important to know exactly what the law says about abortion in your community and to understand the consequences of breaking the law — for the woman and for anyone who helps her.

In the Philippines, abortion is illegal and it is very difficult to organize for safe abortion. So we advocate secretly among friends and network organizations, and we tell people how to get reliable information through the Internet.

At the beginning of this chapter we shared part of Doctor Aruna Uprety’s story. She became an activist for safe abortion in Nepal when she could not save the life of a young mother who was injured by an unsafe illegal abortion. Here is the rest of Aruna Uprety’s story.

The long struggle for legal and safe abortion in Nepal

The death of that young mother made me realize that poor women with unintended pregnancies had very few options. I decided to share the story of that woman and work to change the law so women could have safe and legal abortions when they needed them. I wrote an article for a small newspaper and received many angry letters in reply. But I kept writing, telling stories of women who died and opposing the injustices poor women faced.

In 1990, the democracy movement in Nepal changed things. After many protests in the streets, we had a new parliament and constitution. Before, newspapers and radio stations were all controlled by the government. Now, there were many new newspapers and radio programs, and some were willing to talk about abortion. The time was right for changing the law. 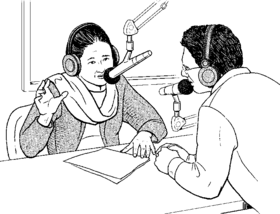 During that time, I met a journalist, a man named Gujraj, who became an important ally. He not only printed my articles but sent reporters to villages when he heard of abortion-related deaths. Men who had lost their wives began to tell their stories in public. Another ally was a politician named Sunil who spoke in favor of women’s rights and abortion. This support from men helped more people learn about unsafe abortion and see that it was not just a women’s issue. Men, too, suffered from the loss of their wives, daughters, sisters, and friends.


I also began speaking on the radio. One day, after I shared stories of women who had died, I also told my own story. I described the abortion I had when I discovered I was pregnant 6 months after giving birth to my first child. And I said, "If the government has the courage to arrest me, I will be glad to go. If it will not arrest a woman who is a doctor for having an abortion or performing abortions, why arrest women from villages and spoil their lives?"

I thought people needed to see the faces of women who had died or had gone to prison, and I began to collect photographs of women along with their stories. Of course, I asked permission from them or their families first. Other activists found out how many women had died, and some surveyed people’s changing attitudes about abortion. We presented this information at a gathering of politicians and health experts, saying that if they cared about stopping women from dying in childbirth, then they also needed to end unsafe, illegal abortion. Their opinions began to change, but the law did not. 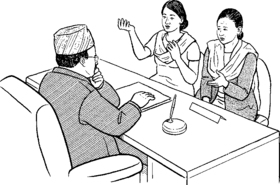 For a long time, I worked with a group of people to draft a law that would make abortion legal. The first time we proposed the new law, it did not pass. In 1999, we tried again. We proposed that all women could have a safe abortion up to 12 weeks of pregnancy. If a woman had been raped, or if she had mental or physical reasons that made the pregnancy dangerous, she could have an abortion up to 18 weeks. After one powerful member of parliament changed his position, the law finally passed.

Today abortion is safe and legal in Nepal, but there is still work to do. When I visit villages far from cities, some doctors still think abortion is allowed only in the case of rape or with a husband’s permission. Our work now is to spread the word that women have a legal right to safe abortions. We pressed the government to open training centers so doctors and nurses would learn how to provide safe abortion. At the same time, we need to teach young people about family planning, so they will not need abortions. 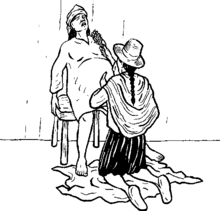 Ways to advocate for safe and legal abortion

Usually there is no single way to organize that will succeed. Here are a variety of efforts that groups have used in their struggles to make abortion safe and legal:

Talk about maternal mortality — women dying because of being pregnant — not abortion.

Share stories of real women who died or went to prison because of an abortion.

Work with others who share your vision. You will give each other encouragement and support, and together you can build a movement.

Involve men. They play an important role in opening up the conversation about abortion.


Use language that unites, not language that will spark disagreement. In Nepal, people were much more ready to "end unsafe, illegal abortion" than they were to "legalize safe abortion." In some countries, people who might oppose the word "abortion" are not opposed to "menstrual regulation." When a woman misses her period, she can go to her doctor to "make her monthly bleeding return."

Timing is everything. There are moments in politics, such as a strong pro-democracy movement, when much progress can be made. 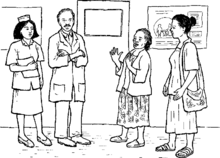 Make abortion available after it is made legal. Doctors and other health workers need to be trained, funding must be found, and women need to know where to get safe abortion care.

Make family planning more available so women will need fewer abortions. Work to change community attitudes that deny women the right to make decisions about their own health.

Use medicines for abortion and for emergency post-abortion care. Learn about how these medicines are used, and where they are available. Advocate to make this information available to women and to community health workers.

← PREVIOUS | NEXT →
Retrieved from "http://en.hesperian.org/w/index.php?title=Health_Actions_for_Women:Organizing_to_make_safe_abortion_available&oldid=91790"